When it comes to the more than 1,800 recessively inherited diseases that have been identified, it is important for would-be parents to know if they are carriers of a serious disorder and the likelihood that their child will inherit it. Genetic carrier screening offers future parents the opportunity to make informed decisions at the preconception stage or during pregnancy.

Advances in next-generation sequencing (NGS) have enabled the expansion of carrier screening, meaning a broad range of inherited disorders can now be included in a single screening assay. However, some of the most common inherited disorders included in these assays involve difficult targets, such as highly homologous genes, which are challenging to screen for i.e., SMN1 and SMN2 or HBA1 and HBA2.

Luckily, along with advances in NGS, sophisticated bioinformatics algorithms are improving the accuracy with which the homologous genes involved in many inherited disorders can be mapped. 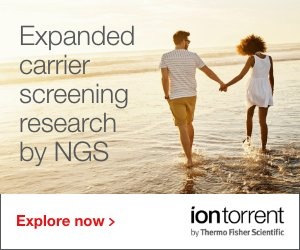 While SMA is caused by mutations in the survival motor neuron 1 (SMN1) gene, the severity of the disease—which can range from mild muscle weakness in adulthood to complete debilitation—depends on survival motor neuron 2 (SMN2) gene copy number. Most individuals have two copies each of SMN1 and SMN2; however, due to its complex structure, gene conversion and rearrangements occur frequently in the SMN locus leading to copy-number variants.

Establishing SMN2 copy number is important for SMA patients due to its inverse correlation with disease severity. But the nearly identical sequences of SMN1 and SMN2, and the complexity of the SMN locus, makes the estimation of copy number challenging.

A similar challenge occurs in carrier screening for alpha thalassemia. This recessive genetic blood disorder reduces the oxygen that can be carried by hemoglobin molecules, leading to anemia, heart defects, weakness, fatigue, and enlarged liver or spleen. Most babies born with alpha thalassemia are stillborn or die soon after birth.

Alpha thalassemia is caused by mutations in two different genes, hemoglobin alpha-1 (HBA1) and hemoglobin alpha-2 (HBA2), which are involved in the production of the alpha-globin subunits of hemoglobin. Humans have two copies of each gene, meaning up to four genes can be affected in a given individual. Variability in the number of mutated genes determines disease severity and carrier status; when both parents are missing at least one alpha-globin allele, there is a risk that their children will have alpha thalassemia.

Like the SMN1 and SMN2 genes, HBA1 and HBA2 are almost identical gene paralogs, making alignment to reference sequences challenging. Yet, it is important to differentiate between the two affected genes because mutations in HBA2 lead to more severe consequences.

Benefits of NGS and powerful bioinformatics

Prior to the emergence of high-throughput approaches like NGS and high-density microarrays as clinical tools, carrier screening was limited by both a lack of gene-specific knowledge and the high cost of commercial testing. Traditional carrier screening using PCR-based assays, Sanger sequencing, and low-density microarrays was—and continues to be—performed on individuals with known family history of a disease. Such screening is relatively straightforward, as the causative mutation has already been identified.

Compared to microarrays and more traditional methods, NGS offers greater sequence context for carrier screening by providing phased information on how variants are linked together. That context enables differentiation between highly homologous regions, and studies have shown that recently-developed NGS-based panels have higher detection rates for a larger number of genes than conventional genotyping.

Due to the challenging nature of SMN1 and SMN2, and HBA1 and HBA2, it is important to have a well-designed bioinformatic algorithm that can quickly and reliably ascertain the variants present across a sample set—a critical component of expanded carrier screening.

To explore more about the advantages of NGS in expanded carrier screening, register for this on-demand webinar.