FISH, fluorescence in situ hybridization, is a cytogenetic technique enabling “mapping” of the genetic material of cells. It is commonly used to label DNA providing information on the location, length, and number of copies of specific genes or chromosome portions. Additionally, it can be applied to all types of RNA, and is foremost utilized to detect copy numbers and location of mRNA to visualize cellular transcription activity. FISH is based on the specific interaction between a fluorescence-labeled probe and a specific target sequence in cellular DNA or RNA. FISH was first described in 1969 by two independent research groups. It is one of the oldest cytogenetics methods and was used as early as 1993 to determine aneuploidy for preimplantation diagnostics.

How Does it Work? 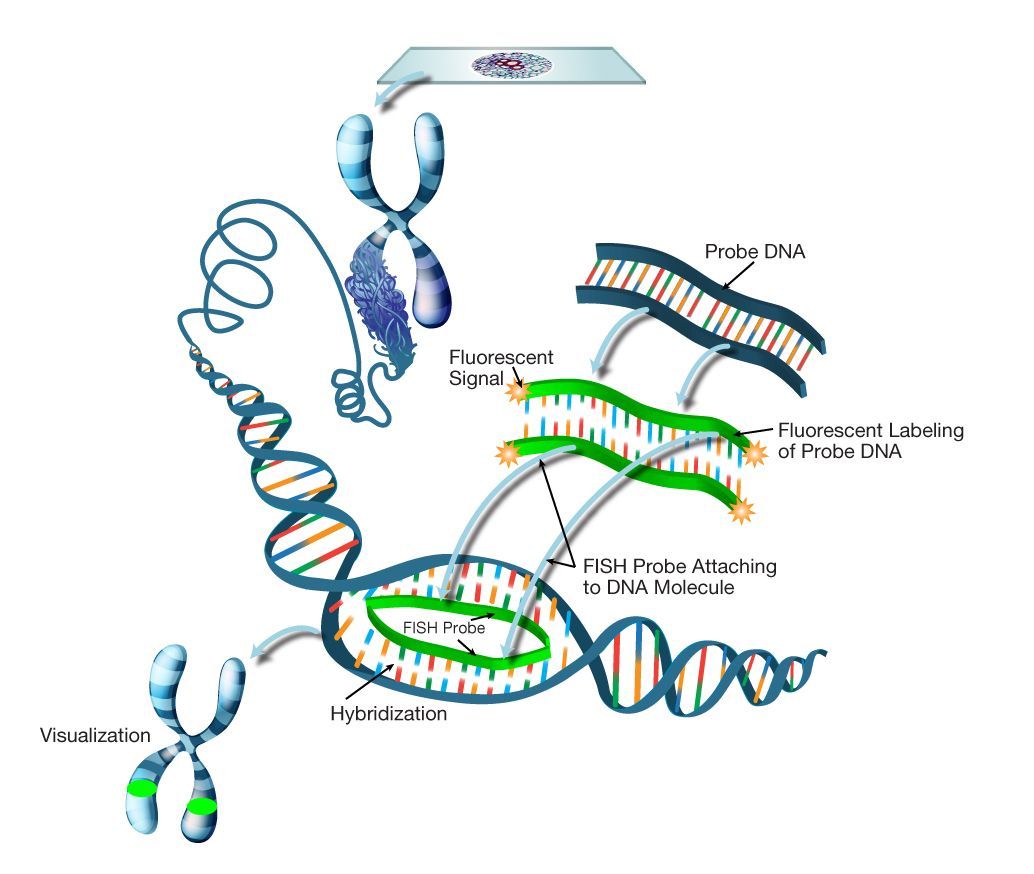 What is the Difference Between FISH and ISH?

FISH and ISH both use the same concept of in situ hybridization, but FISH does so with the addition of fluorescent probes. This enables direct detection. Fluorescence allows the visualization of probes in combination with the surrounding cells and tissues. Looking for a particular DNA sequence within whole chromosomes has been described as looking for a needle in a haystack. Attaching markers that cause the segments of interest to pop out with color gives a much clearer picture of where they are and can help us picture why their location on the chromosome might be significant.

What Sample Types are Used in FISH?

FISH can be used with tissue samples, chromosome spreads and cell cultures, such as:

What Information does FISH Actually Provide?

FISH provides a visual, color-coded map of DNA segments of interest within chromosomes. It tells us where they are along the chromosome and approximately how many segments are present and have been bound. Because FISH allows for a fluorescent copy of the DNA of interest, it can be used for a multitude of different applications, including:

Most importantly, FISH helps us understand the organization, regulation, and function of genes, which in turn gives us valuable information on how to treat genetic diseases. Using this technique, we can examine chromosomal integrity or localize and measure DNA/RNAs within tissues, giving us the tools to catch diseases early, understand how they work, and ultimately find cures.