CRISPR-based systems are well known for their use in gene editing and gene therapy applications due to their ability to cleave or “cut” nucleic acids. More recently, researchers have begun using the bacteria-derived technology to develop the next generation of rapid, accurate, and inexpensive molecular diagnostic technologies that can detect everything from antibacterial resistance and viral outbreaks to cancer-causing mutations in circulating tumor cells.

First used in vitro in 2012, CRISPR-based enzymes derive from prokaryotic immune systems that target viruses. CRISPR-associated (Cas) proteins use single-stranded guide RNAs (sgRNA) to target and cleave a complementary nucleic acid sequence with single base-pair specificity. This specificity arises via Watson-Crick base pairing between sgRNA and target DNA, or sgRNA and target RNA.

Advantages of CRISPR-based systems over PCR

In terms of molecular diagnostics, CRISPR-based systems are ideal to detect the nucleic acid sequences of different pathogenic strains with single base specificity.1 For example, Cas9 and Cas12 proteins target DNA, while Cas13 targets RNA. This is a major advantage over the generated primers used to amplify target sequences in PCR, which are prone to off-target effects and non-specific amplification.

In addition to improving the accuracy of nucleic acid tests, CRISPR-based molecular diagnostics are ideal for point-of-care testing in low-resource settings3 as they do not require a complex laboratory setup; the reactions use simple reagents and do not require thermocycling, unlike PCR-based technologies.

How CRISPR can help diagnose disease

There are currently a variety of CRISPR-Cas diagnostic platforms being developed to diagnose infectious and noninfectious diseases.

An advantage of Cas13-based diagnostics is that they directly target RNA. An RT-PCR test for an RNA virus requires the RNA to be amplified into DNA before PCR, which can lead to non-specific amplification and false negative diagnoses.4 Introduced in 2017, the SHERLOCK (specific high-sensitivity enzymatic reporter unlocking) platform uses Cas13a and a fluorescent reporter to detect target RNA molecules.1 More recently, researchers enhanced SHERLOCK to detect viral genetic material directly from patient serum, urine, and saliva samples in less than two hours without the use of any other instruments.5 This protocol has been used to diagnose flaviviruses such as Zika, Dengue, West Nile, and yellow fever.2,5

Similarly, the DETECTR (DNA endonuclease-targeted CRISPR trans reporter) method, which uses Cas12a to target DNA, is also linked to a fluorescent reporter, and has been used to detect human papillomavirus in patient samples.6

Both of these platforms are versatile and can be adapted to a variety of pathogens in response to novel outbreaks. Researchers recently used DETECTR and SHERLOCK to develop a test for SARS-CoV-2,7 the latter of which could produce results in an hour.8

Likewise, researchers have used Cas12a to develop a highly sensitive test for Mycobacterium tuberculosis (Mtb). The test, called CRISPR-MTB, had better sensitivity (79 percent) than Mtb culture (33 percent), while maintaining a specificity of 98 percent.10 In addition to better sensitivity, which reduces the chance of false-negatives, because CRISPR-MTB does not require culture, patients could receive reliable results sooner.

Identifying genetic mutations, such as single nucleotide polymorphisms (SNP), currently requires benchtop instruments or genome sequencing, but the specificity of CRISPR-based diagnostics has the potential to change that. For example, during the Zika virus epidemic, researchers quickly developed a SHERLOCK-based test to detect a SNP associated with fetal microcephaly in patients with Zika virus.5 Moreover, producing results in only 15 minutes, the CRISPR-Chip platform has been used to detect the deletion of two exons associated with Duchenne muscular dystrophy.11

The highly specific and sensitive nature of CRISPR-based tests would be especially useful for the detection of cell-free DNA and circulating tumor cells, which are present in very small amounts in serum, requiring a highly sensitive test.

Though PCR-based diagnostics are currently the gold standard, since their introduction in 2017, CRISPR-based diagnostics have quickly evolved with several advantages, namely speed, simplicity, and lower costs. They are ideal for point-of-care settings, where rapid results can accelerate access to treatments and help prevent the spread of infections.

Though CRISPR-based diagnostics offer accessible readouts and do not require complex laboratory facilities with benchtop thermocyclers, many of the other limitations of PCR-based diagnostics, such as reliable access to PPE, sample reagents, and nucleic acid extraction kits, still also apply to CRISPR-based tests. These challenges must be overcome to produce a one-step diagnostic test that meets the Clinical Laboratory Improvement Amendments (CLIA) requirements in the US. Even so, there is no doubt that portable CRISPR-based tests will soon revolutionize the field of clinical diagnostics. 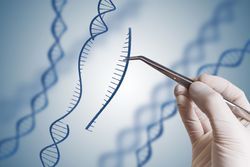