In the last decade, tremendous progress has been made in the field of molecular diagnostics. Many new nucleic acid-based detection tools or assays have been developed that allow analysis of DNA and RNA molecules in samples. These assays are now routinely used for monitoring, detecting, and ultimately deciding which therapies would work best. Specific molecular probes are designed for this purpose. Molecular probes are used in various techniques for the detection of nucleic acid sequences in the food industry, and environmental, medical and veterinary applications to improve the specificity of the analyses. In medicine, they can help identify genetic and chromosomal abnormalities of infectious, acquired and inherited diseases. Nucleic acid probes are either a single stranded DNA or RNA with a strong affinity towards specific DNA or RNA target sequence. This affinity and complementary sequence allows binding to specific regions of a target sequence of nucleotides. The degree of homology between target and probe results in stable hybridization. In developing a probe, a sequence of nucleotides must be identified, isolated, reproduced in sufficient quantity, and tagged with a label (reporter molecule) that can be detected. In theory, any nucleic acid can be used as a probe provided it can be labeled to permit identification and quantitation of the hybrid molecules formed between the probe and the sequence to be identified. Probes can be broadly categorized into DNA probes and RNA probes. At Enzo, we offer a complete set of tools for nucleic acid labeling and detection.

What are DNA Probes?

A DNA probe is a fragment of DNA that contains a nucleotide sequence specific for the gene or chromosomal region of interest. DNA probes employ nucleic acid hybridization with specifically labeled sequences to rapidly detect complementary sequences in the test sample. A variety of methodologies for labeling DNA have been described. In short, these methods are used to generate end-labeled or continuously labeled probes.

Most enzyme-mediated labeling techniques are very much dependent on polymerase activity, which is responsible for incorporation of the labeled nucleotides. Furthermore, the use of Taq or other thermostable DNA polymerases permits labeling reactions to be performed at higher temperatures via PCR, thereby reducing the incidence of enzyme-mediated point mutations during probe synthesis.

PCR is an excellent method for probe synthesis, requiring very small quantities of template material. In the presence of appropriately labeled nucleotide primers, PCR products are labeled as they are being synthesized. Alternatively, the primers themselves may be labeled nonisotopically during their own synthesis, negating the requirement for the inclusion of labeled nucleotide precursors as part of the reaction mix. Random priming is a type of primer extension in which a mixture of small oligonucleotide sequences, acting as primers, anneal to a heat denatured double-stranded template. The annealed primers ultimately become part of the probe itself, because the Klenow fragment of DNA polymerase I extends the primers in the 3′ direction and, in so doing, incorporates the label.

Nick translation is one of the oldest probe labeling techniques. It involves randomly nicking the backbone of a double-stranded DNA with dilute concentrations of DNase I. At extremely low concentrations, this enzyme nicks a template at our or five sites, producing a free 3’-OH group that can act as a primer at each nicking location. ext, the enzyme DNA polymerase I removes the native nucleotides from the probe molecules in the 5′→3′ direction (exonuclease activity) while replacing them with labeled deoxyribonucleoside triphosphates (dNTPs) precursors by virtue of its 5′→3′ polymerase activity. Nick translation is efficient for both linear and covalently closed DNA molecules, and labeling reaction are completed in less than an hour.

What are RNA Probes?

RNA probes are stretches of single-stranded RNA used to detect the presence of complementary nucleic acid sequences (target sequences) by hybridization. RNA probes are usually labeled, for example with radioisotopes, epitopes, biotin or fluorophores to enable their detection. RNA probes as hybridization tools remain popular because of several key advantages associated with their use. These probes are synthesized by in vitro transcription and can be substituted for DNA probes in nearly all applications. High specific activity RNA probes or riboprobes may also be synthesized from DNA templates cloned in expression vectors such as SP 6 and T 7 systems. RNA probes are single-stranded and offer several advantages over DNA probes including improved signal or hybridization blots. Compared to the diverse methods for DNA probe synthesis, there is only one reliable method for labeling RNA probes, namely in vitro transcription. Because of the intrinsically labile nature of RNA and the susceptibility to RNase degradation, RNA probes must be treated with the same care as any other RNA preparations.

In vitro transcription is a reliable and economical method for generating RNA probes. Large amounts of efficiently labeled probes of uniform length can be generated by transcription of a DNA sequence ligated next to an RNA promoter. One excellent strategy is to clone the DNA to be transcribed between two promoters in opposite orientations. This allows either strand of the cloned DNA sequence to be transcribed in order to generate sense and antisense RNA for hybridization studies. One alternative method to generating continuously labeled RNA probes by in vitro transcription is to label the 5′ end of the molecule. This method of 5′ end-labeling is colloquially known as the kinasing reaction; it specifically involves the transfer of the γ phosphate of ATP to a 5′-OH substrate of RNA or DNA (forward reaction). The forward kinasing reaction is far more efficient than the exchange reaction which involves the substitution of 5′ phosphates.

Probe synthesis by 3′ end-labeling involves the addition of nucleotides to the 3′ end of either DNA. DNA 3′ end-labeling is most often catalyzed by terminal transferase. Single- and double-stranded DNA molecules are labeled by the addition of dNTP to 3′-OH termini. RNA can also be 3′ end-labeled using the enzyme poly(A) polymerase. This enzyme, which is naturally responsible for nuclear polyadenylation of many heteronuclear RNAs, catalyzes the incorporation of Adenosine Mono Phosphate. Isotopic labeling requires α-labeled ATP precursors. In addition to its utility in RNA probe synthesis reactions, poly(A) polymerase can be used to polyadenylate naturally poly(A)–mRNA and other RNAs in order to support oligo(dT) primer-mediated synthesis of cDNA. 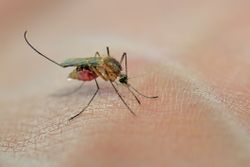