In the early days of the pandemic, with commercial COVID-19 tests in short supply, Rockefeller’s Robert B. Darnell developed an in-house assay to identify positive cases within the Rockefeller community. It turned out to be easier and safer to administer than the tests available at the time, and it has been used tens of thousands of times over the past nine months to identify and isolate infected individuals working on the university’s campus.

Now, a new study in PLoS confirms that Darnell’s test performs as well, if not better, than FDA-authorized nasal and oral swab tests. In a direct head-to-head comparison of 162 individuals who received both Rockefeller’s “DRUL” saliva test and a conventional swab test, DRUL caught all of the cases that the swabs identified as positive—plus four positive cases that the swabs missed entirely.

“This research confirms that the test we developed is sensitive and safe,” says Darnell, the Robert and Harriet Heilbrunn Professor and head of the Laboratory of Molecular Neuro-Oncology. “It is inexpensive, has provided excellent surveillance within the Rockefeller community, and has the potential to improve safety in communities as the pandemic drags on.”

An answer to nasal swabs

COVID-19 testing was a nightmare in the early days of the pandemic. Feverish patients slipped germ-covered masks under their noses and braced for providers to plunge swabs deep into each nostril. Nurses risked catching the disease with every twist of the swab; technicians hazarded handling vials full of transport medium designed to keep viruses alive. And then came the shortages. All at once, we ran out of swabs, gloves, masks, and medium. The virus raged on.

The DRUL test offered several advantages. It was safe—a test that could be taken at home and sent to the lab in transport medium that kills virus on contact. It was efficient. The assay used only off-the-shelf reagents, ducking beneath shortages that felled other programs. It was inexpensive, costing around $2 per test. (By comparison, Medicare is currently paying up to $100 for every commercial test conducted.) And it was comfortable. Providing a sample was a simple matter of spitting in a cup.

The data from this study, which was previously submitted to New York State as part its approval process, shows that DRUL matches and, in most cases, outperforms the widely used tests against which it was benchmarked.

The researchers first assessed DRUL’s limit of detection—how many viral copies the test could catch per volume of fluid. The test succeeded in detecting a single viral particle in one microliter of saliva, a figure comparable to that of the most sensitive assays. The lab then ran 30 nasal swabs that had tested positive for COVID-19 through their novel testing platform. DRUL caught all 30.

Next, in a direct challenge, Darnell’s team compared 162 results from volunteers who received both a swab and a saliva test. Predictably, almost all came back negative. But four that were negative or indeterminate on the swab test were positive on the DRUL assay and, indeed, three of those samples belonged to volunteers who went on to develop symptomatic COVID. 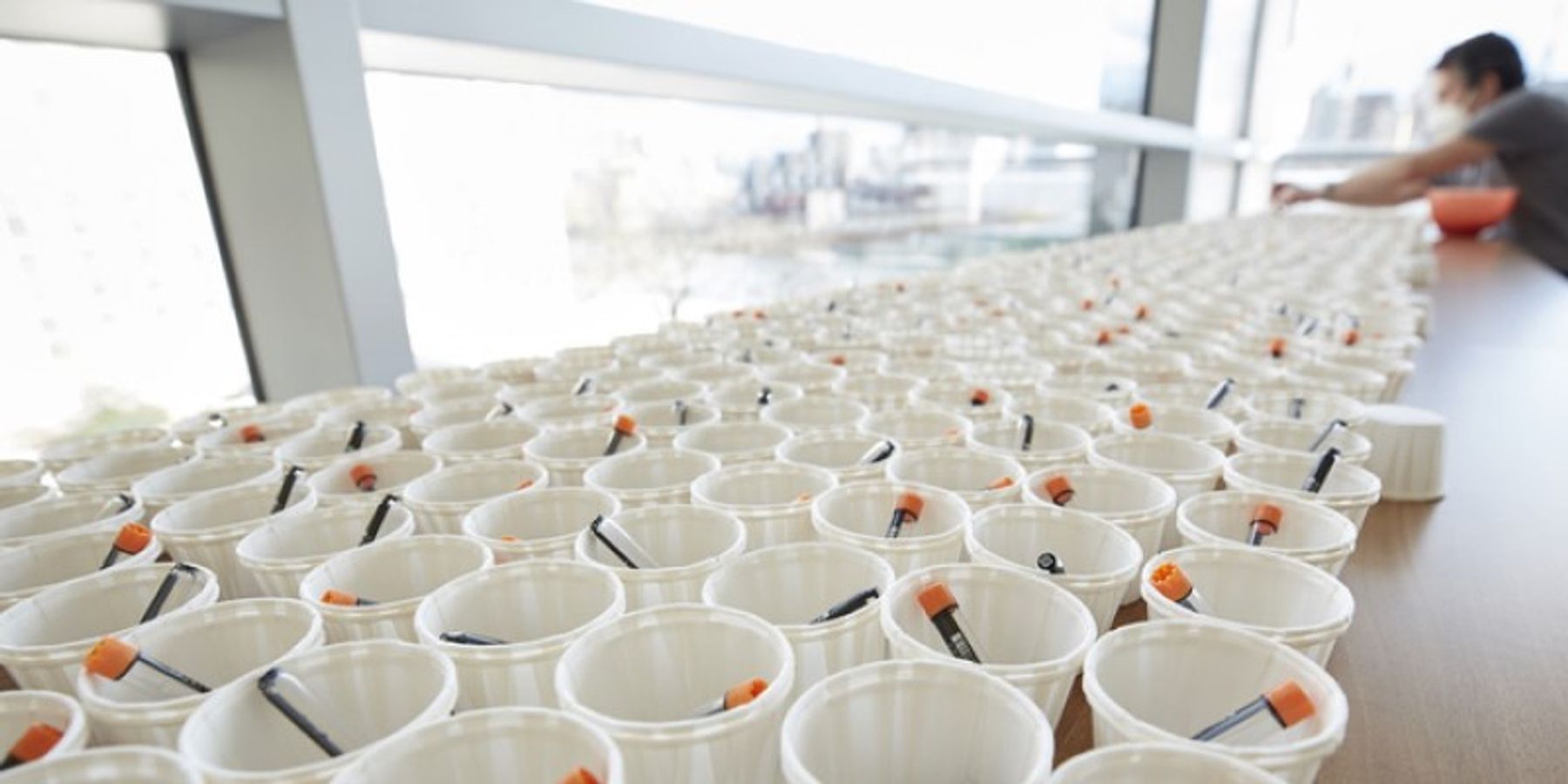 Stored in orange-capped vials for mass distribution, the DRUL buffer is part of an inexpensive saliva-based COVID-19 test developed at Rockefeller.
Rockefeller University

In the months since it was approved as a clinical diagnostic test in New York State, DRUL has been widely used on campus, first with select essential employees and then as a weekly screening program run out of Darnell’s lab that allowed Rockefeller’s Child and Family Center for children of employees to re-open safely by the summer of 2020.

“The CFC was a pilot program, demonstrating that we could use the test for weekly screenings,” says Virginia Huffman, vice president for human resources at Rockefeller. It worked. “We were open for four months with 150 students on-site and not a single positive,” adds Pamela Stark, director of the CFC. When the first positive case appeared in December, Darnell’s lab and the CFC coordinated contact tracing and strategic quarantining. No one else was infected.

- This press release was originally published on The Rockefeller University website