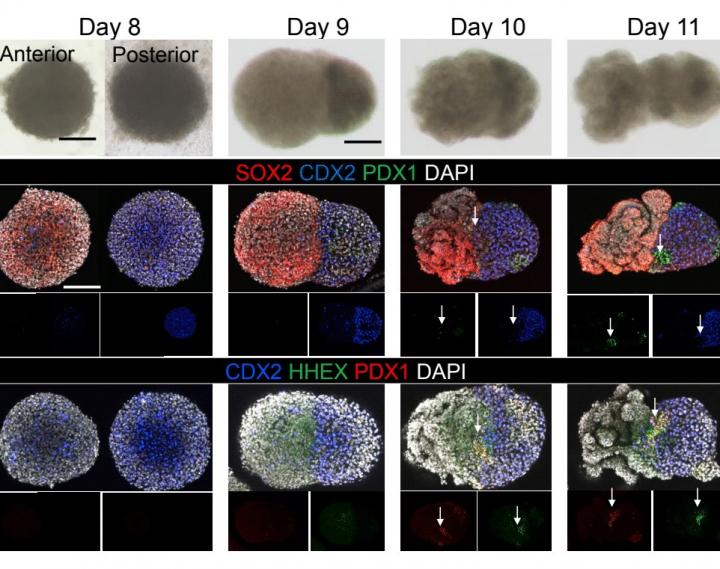 These confocal microscope images depict the key moments that gut organoids begin to take shape, transitioning from two 'spheroids' of mixed cell types to a merged proto-gut that shows the early stages of formation for a liver, pancreas and connecting biliary ducts. Details about the project, led by Takanori Takebe, MD, were posted online Sept. 25, 2019, in the journal Nature.
Credit: Cincinnati Children's

Imagine trying to paint a forest when all the artist has is a leaf and a piece of bark versus having a living, growing tree as a model. Seeing how the parts fit together can make all the difference.

That's the level of advancement in organoid science that researchers at Cincinnati Children's have achieved with findings published Sept. 25 in the prestigious journal Nature. Instead of growing mini human organs independently in separate lab dishes, a team led by Takanori Takebe, MD, succeeded at growing a connected set of three organs: the liver, pancreas, and biliary ducts.

By themselves, human organoids already provide a sophisticated tool for research. But this advance allows scientists to study how human tissues work in concert. This major step forward could begin reducing the need for animal-based medication studies, sharply accelerate the concept of precision medicine, and someday lead to transplantable tissues grown in labs.

"The connectivity is the most important part of this," Takebe says. "What we have done is design a method for producing pre-organ formation stage tissues so that they can develop naturally. We are maximizing our capacity to make multiple organs much like or body does."

Takebe, age 32, joined Cincinnati Children's in 2016 and holds a dual appointment at Tokyo Medical and Dental University (TMDU) in Japan. He graduated from medical school in 2011 with plans to become a liver transplant surgeon. But as he learned about the yawning gap between the supply and demand for donor organs, Takebe shifted gears to focus on organ supply.

In previous research, Takebe has demonstrated a method to produce large supplies of liver "buds," an early-stage form of a liver organoid. He also has grown liver organoids that reflect disease states, including steatohepatitis, a dangerous form of liver scarring and inflammation that occurs in some people with obesity.

His work to date has been hailed by the Imperial Prince of Japan, who presented Takebe with an honor in 2018 from the Japan Society for the Promotion of Science. Discover magazine also listed Takebe's organoid work as number five in its list of the top 100 science achievements of 2013.

But Takebe says this project is his highest-impact work yet.

"We noted this point in organ differentiation some time ago. But it took five years to tune up the culture system to allow this development to occur," Takebe says.

How three proto-organs grow in concert

The hardest parts of the process were the earliest steps. Takebe worked for many hours with colleagues at Cincinnati Children's including first author Hiroyuki Koike, PhD, now at Nippon Medical School in Japan, to perfect the process. They started with human skin cells, converting them back into primitive stem cells, then guiding and prodding those stem cells to form two very early-stage "spheroids" of cells loosely termed the foregut and the midgut.

These balls of cells form very early in embryonic development. In humans, they form late in the first month of gestation. In mice, they form in just 8.5 days. Over time, these spheres merge and morph into the organs that eventually become the digestive tract.

Growing these spheroids in the lab was a complex process that required using the right ingredients at the right time. Once they were mature enough—a timing step that required much work to pinpoint—then came the easier part.

The team simply placed the spheroids next to each other in a special lab dish. The cells were suspended in a gel that's commonly used to support organoid growth, then placed on top of a thin membrane that covered a carefully mixed batch of growth medium.

"From this point, the cells knew what to do," Takebe says. (see video for illustration of this)

The lab team simply watched as cells from each spheroid began to transform upon meeting each other at the boundary between the two. They converted themselves, and each other, into more specialized cells that could be seen changing colors thanks to chemical tags the lab team had attached to the cells.

Soon, the merging, changing spheres sprouted into branches leading to new groups of cells that belonged to specific organs. Over a period of 70 days, these cells continued to multiply into more refined and distinct cell types. Ultimately, the mini organoids began processing bile acids as if they were digesting and filtering food.

"This was completely unexpected. We thought we would need to add ingredients or other factors to push this process," Koike says. "Not trying to control this biological process led us to this success."

What does this advance mean?

Aaron Zorn, PhD, director of the Center for Stem Cell and Organoid Medicine (CuSTOM) at Cincinnati Children's says this advance will be useful in multiple ways.

"The real breakthrough here was to be able to make an integrated organ system," Zorn says. "From a research perspective this is an unprecedented opportunity to study normal human development."

However, Takebe and colleagues were able to grow these organoids only so far.

For the long-term hope of growing organ tissues large enough to be useful in human transplantation, Takebe says more work is needed. He and his colleagues already have started working on ways to add in immune cells along with cell lines needed to form blood vessels, connective tissues, and more.

But for research and diagnostic purposes, this discovery may have more immediate implications.

In precision medicine, doctors are starting to use genomic data and other information to determine exactly which treatments would work best for patients with serious disease, at what dose, and with the least amount of possible side effects.

A living "gut" of multiple organs would provide scientists with a powerful tool for studying exactly how gene variations and other factors affect organ development during pregnancy, and to develop better targeted drugs to treat conditions after babies are born.

A connected system of "generic" human organoids would offer much more information than having three organoids in disconnected dishes. Growing a set of gut organoids for a specific patient could allow even more precise diagnosis and customized treatment.

"Current liver regenerative medicine approaches suffer from the absence of bile duct connectivity," Takebe says. "While much work remains before we can begin human clinical trials, our multi-organoid transplant system is poised to solve this issue and may someday provide a life-long cure for patients with liver diseases."

Someday may not be so far away

While much more work remains ahead, Takebe and colleagues already report one step toward a practical application.

The team already has grown a set of gut organoids that lack the gene HES1. This is one of several known genes that play a major role in triggering biliary atresia, a condition that destroys the biliary duct system, which leads to liver failure and death unless a transplant can be provided. This condition is the leading cause of liver transplants for children.

The new study demonstrates how the gut organoids are harmed by the lack of HES1. If scientists can find a way to compensate for that genetic variation, they may be able to find a medication or cell transplant that would preserve biliary function in newborns and possibly avoid the need for hard-to-obtain liver transplants.

Heart Failure Diagnoses May Be Missed in a Primary Care Setting

Heart Failure Diagnoses May Be Missed in a Primary Care Setting