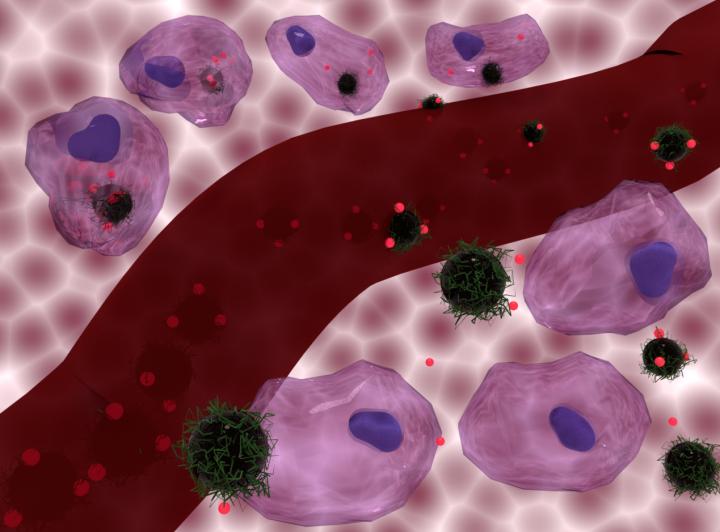 An artist's conception of the doxorubicin-loaded nanocomposite carriers being internalized by cells (at the top) and remaining outside cells (at the bottom), with a blood vessel at the center.
Journal of Materials Chemistry B / Nguyen T. K. Thanh / Florian Aubrit / Olivier Sandre / Lilin Wang

Heating up cancer cells while targeting them with chemotherapy is a highly effective way of killing them, according to a new study led by UCL researchers.

The effects of the two treatments were synergistic—that is, each treatment enhanced the effectiveness of the other, meaning they were more potent when combined than when separate. The study was carried out on cells in a lab and further research is needed ahead of clinical trials involving patients.

"While this combination of therapy is already approved for the treatment of fast-growing glioblastomas, our results suggest it has potential to be used more widely as a broad anti-cancer therapy.

"This therapy also has potential to reduce the side effects of chemotherapy, by ensuring it is more highly targeted on cancer cells rather than healthy tissue. This needs to be explored in further pre-clinical tests."

In the study, researchers combined the magnetic nanoparticles with a commonly used chemotherapy drug, doxorubicin, and compared the effects of this composite in various scenarios on human breast cancer cells, glioblastoma (brain cancer) cells, and mouse prostate cancer cells.

The researchers found that heating cancer cells by only a few degrees, to 40°C, enhanced the effectiveness of the chemotherapy, meaning the treatment could be effective with lower doses of nanoparticles.

The nanoparticles also have a polymer coating that prevents the chemotherapy drug from leaching out into healthy tissue. The coating is heat and pH-sensitive, and is designed to release the drug when temperature rises and the nanoparticles are internalized within tiny pockets in cells called "lysosomes", which have a lower pH than the rest of the cell medium. This intracellular delivery of the drug was particularly effective for the mouse prostate cancer cells, which showed superior and synergetic cell death effect, especially when the temperature reached 42°C.

Co-author Dr. Olivier Sandre, of the University of Bordeaux, said: "Since heat can be generated through the alternating magnetic field, the release of the drug can be highly localized to cancer cells, potentially reducing side effects."

- This press release was provided by University College London 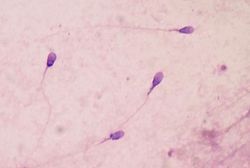