TAMPA, FL — Chimeric antigen receptor T-cell therapy, or CAR T, has become a game changer for lymphoma and leukemia patients who have relapsed or become resistant to previous treatments. The therapy uses a patient’s own immune cells that are re-engineered in the lab to seek out and kill cancer cells when infused back into the patient. Yescarta® (axicabtagene ciloleucel) was the first CAR T-cell therapy approved for the treatment of adults with large B cell lymphoma. The pivotal ZUMA-1 clinical trial that led to its approval showed that 83 percent of patients responded to the therapy, with 58 percent having a complete response. But clinical trials often have stringent eligibility criteria and the outcomes observed may not match what physicians see in a real-world clinical setting.

Moffitt Cancer Center organized a consortium of 16 cancer treatment facilities across the US that offer Yescarta as a standard-of-care therapy for patients with relapsed/refractory large B cell lymphoma. They wanted to determine if the safety and effectiveness seen in the ZUMA-1 clinical trial were similar for patients treated with the now commercially available CAR T therapy. Their findings were published in the Journal of Clinical Oncology.

The consortium pooled retrospective data on 298 patients who completed apheresis, the process to remove a patient’s T cells, with the intent of having Yescarta manufactured and administered. It is important to point out that of this group, 129 patients (43%) would not have qualified for CAR T-cell therapy based on the ZUMA-1 comorbidity eligibility criteria. Overall, 275 patients (92%) received a Yescarta infusion. In the ZUMA-1 trial, 108 patients received Yescarta.

“Our analysis found that the overall response rate of 82 percent, and estimated 12 month durable response rate of 47 percent, for our group of patients compared favorably to the ZUMA-1 trial results,”  said Frederick Locke, MD, corresponding author of the study and vice chair of the Department of Blood and Marrow Transplant and Cellular Immunotherapy and co-leader of the Immunology Program at Moffitt. “Durable response rates were encouraging even in patients with significant comorbidities, suggesting that patients need not meet ZUMA-1 eligibility criteria to benefit from axicabtagene ciloleucel.”

One adverse reaction that can occur following CAR T therapy is cytokine release syndrome (CRS). This occurs when a large number of cytokines, which are small proteins released by immune cells, are rapidly released into the blood. This can cause a patient to have a fever, increased heart rate, difficulty breathing, and low blood pressure. In the ZUMA-1 trial, 11 percent of patients treated with Yescarta experienced severe CRS. However, in the commercial setting, that number was lower at seven percent.

“We believe this observation is due to the greater use of tocilizumab and corticosteroids compared to ZUMA-1, in line with evolving practice patterns for toxicity management,” said Michael Jain, MD, PhD, co-first author and assistant member of the Blood and Marrow Transplant and Cellular Immunotherapy Department at Moffitt.

The authors believe this study suggests that patients do not need to meet the ZUMA-1 eligibility criteria to benefit from Yescarta, including upper age limits and those with underlying conditions. 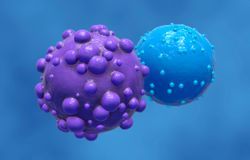