Glioblastoma is the most common form of primary brain cancer. Despite aggressive treatment involving surgery, radiation, and chemotherapy, the disease is one of the deadliest cancer types.

The discovery of a specific therapeutic target only expressed on glioblastoma tumor cells, while not present on healthy tissue, could result in new therapies patients are urgently awaiting.

A research group from the University of Virginia may have found such a target. In July, they published a paper in Nature Communications describing their discovery of a new oncogene in glioblastoma, called advillin (AVIL).

Discovering oncogenes that drive cancer growth is crucial for the development of new therapies, But the abundance of passenger mutations in tumors, which do not directly drive cancer, makes it challenging to see the real culprit genes.

In the new study, the researchers found the AVIL gene by studying pediatric cancers. These cancer types take less time to develop than most adult cancers, and as a result, they have fewer passenger mutations, making it easier to find the more important driver genes.

AVIL expression is widespread in glioblastomas

The researchers then tested whether this gene was essential for tumor growth and whether silencing this gene has therapeutic potential.

Silencing of the AVIL gene in lab cultures resulted in cell death within a few days, while silencing the gene in healthy brain cells did not affect their growth.

The researchers then studied mice by injecting them intracranially with glioblastoma cells. The test samples had the AVIL gene silenced, while control cells were without silenced genes. The tumor growth was much slower in the test samples, and the mice survived until the end of the experiment. The control mice all succumbed to the disease after 4-5 weeks.

Additionally, the silencing of AVIL in a glioblastoma stem cell line also reduced migration in vitro, and in vivo silencing led to much smaller tumors than their not silenced control counterparts. Since cancer stem cells are thought to be the driving forces behind tumor growth and therapy resistance, these cells are likely the most critical cells to kill to eradicate the tumor. These results suggest that may be possible by targeting AVIL in stem cells.

The cytoskeleton is involved in the mechanism of action of AVIL

The researchers also studied the possible mechanism of action of this oncogene. AVIL is a member of the villin/gelsolin family of proteins, which are known actin-regulating proteins. Using colocalization imaging and high-speed ultracentrifuge, the researchers confirmed that AVIL binds to actin filaments, which are vital parts of the cytoskeleton. Further evaluating the effect of AVIL knockout, they confirmed that AVIL is essential for cytoskeleton movement.

The cytoskeleton is involved in many cellular processes. It is well known for its role in keeping the cell shape and size, but it is also involved in cell proliferation, migration, and even some transcriptional regulation. It may, therefore, be essential in carcinogenesis.

These findings all point towards AVIL being an oncogene vital to the development of glioblastoma. Since glioblastoma cells require AVIL expression to survive, this tumor type may have an oncogene addiction to AVIL. In this process, tumor cells become entirely dependent on the activity of a particular oncogene. Once the oncogene is inhibited, cells lose essential signaling, resulting in the death of the cell. Targeted cancer therapies can exploit this concept.

Whether these findings will lead to new treatment remains to be investigated. But this new target may just prove to be the Achilles heel of glioblastoma 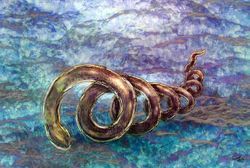