Purdue University researchers have invented a new smart drainage device to help patients with glaucoma, a leading cause of blindness in the world, as they try to save their eyesight.

Glaucoma can be treated only with medications or surgical implants, both of which offer varying degrees of success in helping to improve sight and to relieve pressure buildup inside the eye. The U.S. Centers for Disease Control and Prevention says about 3 million Americans have glaucoma.

Implantable glaucoma drainage devices have grown in popularity over the past years, but only half of the devices are still operational after five years because microorganisms accumulate on the device during and after implantation. This problem is known as biofouling.

"We created a new drainage device that combats this problem of buildup by using advances in microtechnology," said Hyowon "Hugh" Lee, an assistant professor in Purdue's Weldon School of Biomedical Engineering and a researcher at the Birck Nanotechnology Center, who led the research team. "It is able to clear itself of harmful bio-buildup. This is a giant leap toward personalized medicine."

The Purdue glaucoma drainage device is built with microactuators that vibrate when a magnetic field is introduced. The vibrations shake loose the biomaterials that have built up in the tube.

"We can introduce the magnetic field from outside the body at any time to essentially give the device a refresh," Lee said. "Our on-demand technology allows for a more reliable, safe and effective implant for treating glaucoma."

The Purdue technology is published in the latest issue of Microsystems and Nanoengineering. Another unique aspect of the Purdue device is its ability to vary flow resistance, which allows the drainage technology to customize treatment for each patient at different stages of glaucoma with varying degrees of pressure buildup inside the eye.

Other members of the Purdue research team include Arezoo Ardekani, an associate professor of mechanical engineering, and Simon John from the Jackson Laboratory.

The work aligns with Purdue's Giant Leaps celebration, acknowledging the university's global advancements in health as part of Purdue's 150th anniversary. This is one of the four themes of the yearlong celebration's Ideas Festival, designed to showcase Purdue as an intellectual center solving real-world issues.

Researchers are working with the Purdue Office of Technology Commercialization to patent the technology. They are looking for partners to license it. 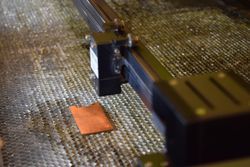 How Antioxidants in Corn Line Could Help Treat IBD

How Antioxidants in Corn Line Could Help Treat IBD