All prediabetes is not the same: in people in the preliminary stages of type 2 diabetes, there are six clearly distinguishable subtypes, which differ in the development of the disease, diabetes risk, and the development of secondary diseases. This is shown in a study by the Institute for Diabetes Research and Metabolic Diseases (IDM) of Helmholtz Zentrum München at the University of Tübingen, Tübingen University Hospital, and the German Center for Diabetes Research (DZD).  The results have now been published in Nature Medicine.

The new classification can help in the future to prevent the manifestation of diabetes or the development of diabetes complications through targeted prevention.

But type 2 diabetes does not develop from one day to the next. People often go through a longer preliminary stage of diabetes, in which blood glucose levels are already elevated but people are not yet ill. "For people with prediabetes it has not been possible until now to predict whether they would develop diabetes and be at risk for serious complications such as kidney failure, or whether they would only have a harmless form with slightly higher blood glucose levels but without significant risk," said professor Hans-Ulrich Häring, who initiated the study 25 years ago. However, such a distinction is important for the targeted prevention of the metabolic disease and thus for counteracting the diabetes pandemic.

Researchers from Tübingen have now achieved an important breakthrough. Using cluster analysis in people with prediabetes, they have discovered six distinct subtypes with different diabetes risk. A differentiated classification of prediabetes and diabetes makes it possible to carry out individual and early prevention and therapy of diabetes and its secondary diseases in a way that is adapted to the development of the disease. 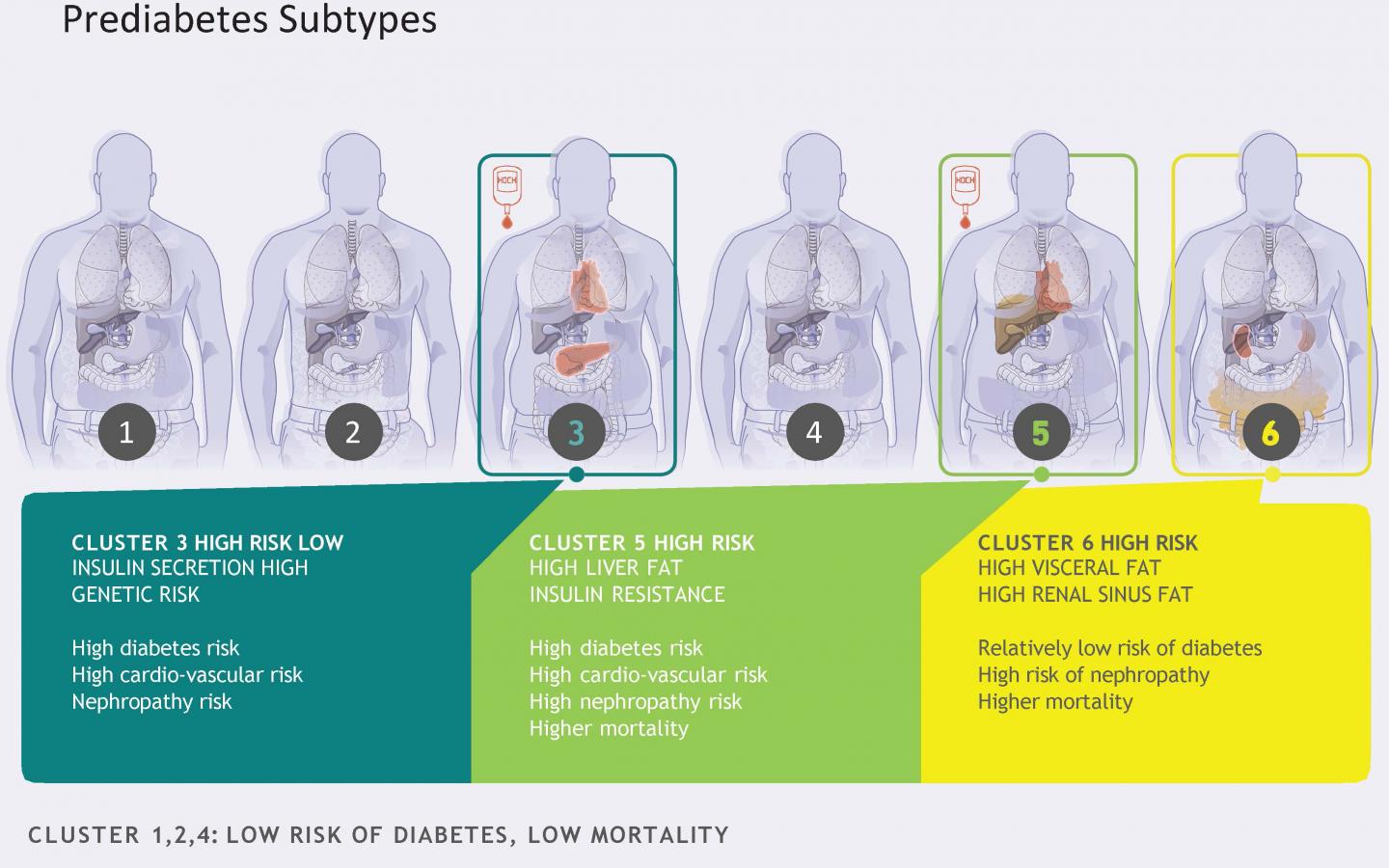 In people with prediabetes, there are six clearly distinguishable subtypes (clusters), which differ in development of the diseases, risk for diabetes, and development of complications.
IDM

The research group led by Häring and professor Fritsche at the University Hospital in Tübingen has conducted detailed studies of the metabolism of people with prediabetes who are still considered healthy. The participants (n=899) are from the Tübingen Family Study and the study of the Tübingen Lifestyle Program. They have repeatedly undergone intensive clinical, laboratory chemical, magnetic resonance imaging, and genetic examinations in Tübingen over the past 25 years.

Based on key metabolic parameters such as blood glucose levels, liver fat, body fat distribution, blood lipid levels, and genetic risk, the researchers were able to identify six subtypes of prediabetes. "As in manifest diabetes, there are also different disease types in the preliminary stage of diabetes, which differ in blood glucose levels, insulin action and insulin secretion, body fat distribution, liver fat, and genetic risk," said first author professor Robert Wagner from the DZD Institute for Diabetes Research and Metabolic Diseases (IDM) of Helmholtz Zentrum München at the University of Tübingen, summarizing the results of the study.

Three of these groups (clusters 1, 2, and 4) are characterized by a low diabetes risk.

The study participants in clusters 1 and 2 were healthy. Slim people are the main members of cluster 2. They have a particularly low risk of developing complications.

The three remaining subtypes (clusters 3, 5, and 6) are associated with an increased risk of diabetes and/or secondary diseases.

People who belong to subtype 3 produce too little insulin and have a high risk of developing diabetes.

People in cluster 5 have a pronounced fatty liver and a very high risk of diabetes because their bodies are resistant to the blood glucose lowering effect of insulin.

In subtype 6, damage to the kidneys occurs even before diabetes is diagnosed. Here, mortality is also particularly high.

The researchers are already making further plans. "Next, in prospective studies, we will first seek to determine to what extent the new findings are applicable for the classification of individual persons into risk groups," said Fritsche of Tübingen University Hospital. If this is the case, people with a high risk profile could be identified early on and receive specific treatment.

New Gene Identified That Contributes to Progression to Type 1 Diabetes

New Gene Identified That Contributes to Progression to Type 1 Diabetes

Biomarker Identified That Predicts Type 2 Diabetes Many Years before Diagnosis

Biomarker Identified That Predicts Type 2 Diabetes Many Years before Diagnosis