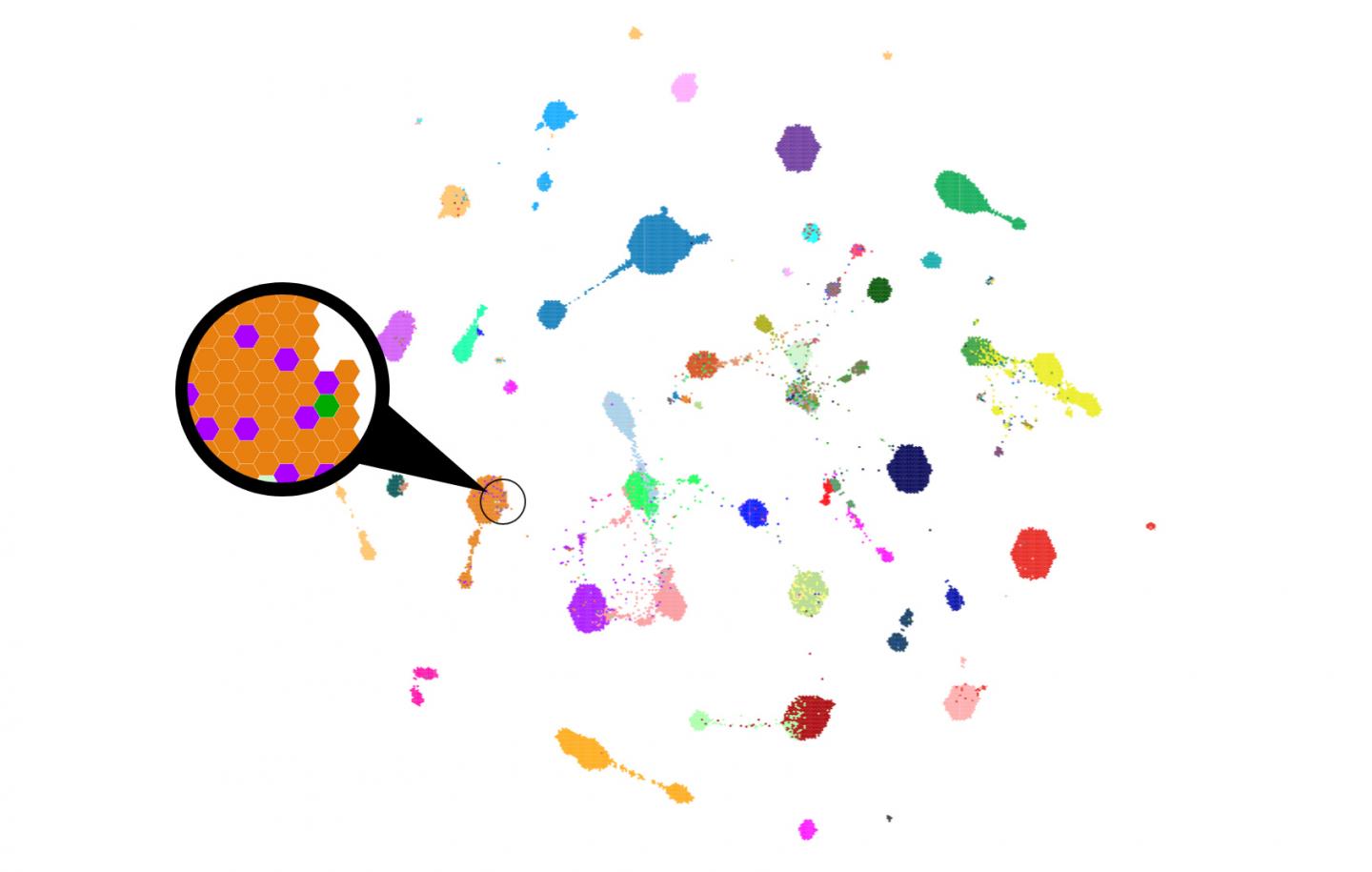 The UC Santa Cruz Treehouse Childhood Cancer Initiative uses TumorMap, a tool developed by Josh Stuart's lab at UCSC, to group tumors by molecular similarity. Each color represents a type of cancer, and each dot represents a patient. This example represents a patient diagnosed with cancer at age eight who quickly ran out of treatment options. Treehouse used TumorMap to compare his tumor to thousands of other tumors and discovered its similarity to adult lung cancer. This finding contributed to extending the patient's life by two years. Treehouse continues to develop this comparative approach and provides its analysis for pediatric cancer patients at children's hospitals.
Credit: Stuart Lab/Treehouse Childhood Cancer Initiative/UCSC

Analyzing gene expression in tumor cells from children with cancer is more likely to reveal targets for therapy than analysis of DNA mutations, according to a new study led by researchers at the University of California Santa Cruz Genomics Institute.

For an increasing number of cancer patients, doctors analyze the specific gene mutations in the patient's tumor to help select the best treatment. In children, however, this kind of genetic profiling of tumors is much less likely to reveal a target for therapy, according to first author Olena Vaske, who holds the Colligan Presidential Chair in Pediatric Genomics at UC Santa Cruz.

"In pediatric cancer, it often isn't a DNA mutation driving the cancer but an error in development caused by a change in how gene expression is regulated," Vaske explained.

Vaske's team at the UCSC Treehouse Childhood Cancer Initiative has focused their efforts on analysis of gene expression data derived from RNA sequencing. When a gene is turned on, or activated, its DNA sequence is transcribed into a messenger RNA molecule. Sequencing the RNA molecules in tumor cells reveals not only which genes are turned on in those cells, but also how active they are (a more active gene makes more RNA transcripts).

Using the Treehouse Initiative's framework for comparative RNA sequence analysis of pediatric tumors, each patient's data were compared to a compendium of over 11,000 tumor RNA sequencing samples from public genomic datasets. The analysis identified unusual gene expression patterns that could be used to identify druggable genes and pathways for each patient.

"We're looking for the outliers, the over-expressed genes that are unusual compared to other cells and that might be driving this patient's disease," Vaske said.

This cohort study was conducted as a consortium of five institutions: UC Santa Cruz, British Columbia Children's Hospital, Lucile Packard Children's Hospital at Stanford, Children's Hospital of Orange County, and the Pacific Pediatric Neuro-Oncology Consortium. The clinical partners sent UCSC researchers the RNA sequencing data for children and young adults with relapsed, refractory, or rare cancer who were being treated on precision medicine protocols. Each clinical site had its own precision medicine protocol in place, and UCSC served as a third-party institution conducting secondary analysis of each site's tumor data.

"This was designed as a feasibility study to show that we can do this—get the data for prospective patients and process and analyze it fast enough to be useful," said Vaske, an assistant professor of molecular, cell, and developmental biology at UCSC. "We showed for the first time that this framework can be used consistently across separate precision medicine clinical trials."

Although the study was not designed to assess clinical impact, the researchers did see correlations between the findings from gene expression analysis and the clinical responses of some patients.

The study also demonstrates the value of consolidating data from publicly available genomic datasets. The UCSC team processed all of the RNA sequencing data, from both public datasets and clinical partners, in a uniform way before doing the comparative analyses. The compendium of consolidated data, which now includes more than 12,000 tumor samples, is available to cancer researchers on the Treehouse Initiative's website. The team has now also built a compendium of RNA sequencing data from normal tissues.

"For the comparative analyses, it's a numbers game, so the larger the compendium, the more robust the analysis will be. That's why we believe so strongly in open sharing of data," Vaske said.

The Treehouse Childhood Cancer Initiative, which Vaske cofounded, brings the power of genomics and big-data analytics to bear on the challenge of finding effective treatments for children with cancer. Working with clinical partners, the Treehouse team now routinely participates in clinical "tumor boards," where doctors and geneticists meet to share information and ideas on treatments for individual cancer patients.

"The next step will be to directly evaluate the clinical utility of this approach. This study has set the stage for us to do that," Vaske said.