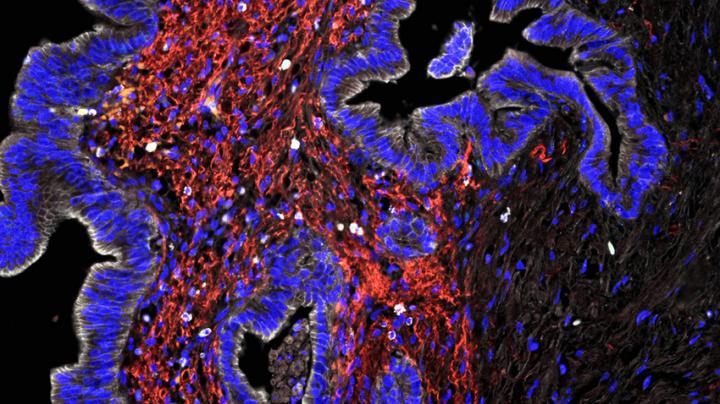 University of Michigan researchers investigated how pancreatic tumor cells (white) interact with other nearby cells.
Image courtesy of the Pasca di Magliano group

Stubbornly, frustratingly, pancreatic cancer has remained resistant to immunotherapies that are revolutionizing the treatment of many types of cancer.

A new study led by the University of Michigan Rogel Cancer Center combined single-cell RNA sequencing with two other investigative techniques to create what is believed to be the most robust and detailed portrait to date of the network of interactions that suppress the body's immune response in and around pancreatic tumors.

The team's findings, which appear in the journal Nature Cancer, put a new spotlight on the large degree to which immune response varies from patient to patient and tumor to tumor—which will need to be taken into account as new immunotherapy combinations are developed against the deadly disease.

"Pancreas cancers just have not been sensitive to immune therapy, and what those of us in the field are trying to sort out is why that is, what makes this cancer so different," says study senior author Marina Pasca di Magliano, PhD, a professor of surgery and of cell and developmental biology at Michigan Medicine. "What has been lacking is even a basic understanding of the variety and individual differences in immune response between patients."

The new research lays a foundation for future translational studies and clinical trials, with the ultimate goal of one day being able to use personalized molecular profiles to determine which immunotherapies would be of greatest benefit to each patient, she adds.

Years in the making, the study represents the effort of nearly 40 University of Michigan clinicians and bench scientists working closely together to develop a trove of data that research groups in the field can draw upon for years to come, the team says.

"I think the key lesson for me as a clinician is that getting immunotherapy to work in this disease will continuing to be challenging because there are complexities that we're only just starting to appreciate," says study co-senior author Filip Bednar, MD, an assistant professor of surgery. "This work opens the door to understanding those complexities and to figuring out how we might overcome them."

One key finding of the study was a new potential biomarker that showed up in the bloodstream of a subset of patients with pancreatic cancer—an immune receptor called TIGIT (for T cell immunoreceptor with Ig and ITIM domains).

"When people talk about immunotherapy, they're primarily talking about targeting a couple of specific molecules -- PD-1 and CTLA4," says co-senior author Howard Crawford, Ph.D., a professor of molecular and integrative physiology and of internal medicine. "What these research efforts have shown is that there's a lot more than just those two bad actors that are inhibiting the immune system and contributing to the ineffectiveness of immune therapy. TIGIT has been barely a blip on the radar."

Importantly, the researchers found that expression of TIGIT in patients' blood corresponded closely with its activity in tumors.

"So that suggests there could be a non-invasive way to assay individual patients to see whether they might be candidates for a future therapy targeting that particular checkpoint receptor—which would be a significant advancement to the current standard of care," says Nina Steele, PhD, a postdoctoral research fellow in Pasca di Magliano's lab and one of four first authors of the study.

Another unique aspect of the study was the breadth and depth of the samples that were collected, the researchers note.

Unusually, the analysis included a significant number of samples from patients with advanced pancreatic cancer. Only about 1 in 4 pancreatic cancer patients are candidates for surgery, so those with earlier stage disease are greatly over-represented in many studies because they rely on samples collected during surgery, explains co-first author Eileen Carpenter, MD, PhD, a gastroenterology fellow.

Early in their cancer journey, however, most patients have a tissue sample collected via needle biopsy so that doctors can obtain a definitive diagnosis—so Carpenter coordinated the collection of research samples at the same time.

Blood samples were also collected from patients, allowing researchers to examine changes to immune cells circulating in the blood and correlate them with what was happening in a patient's tumor microenvironment, adds co-first author Samantha Kemp, a graduate student studying molecular and cellular pathology.

"I think there is often a surprising disconnect between research labs and clinics, even in something as straightforward as bio-specimen collection," Carpenter notes. "I think the bridges we were able to build and the contributions made by so many different labs really speak to the collaborative environment at the University of Michigan. There's a reason we were able to accomplish this work here."

Along with the clinical and laboratory efforts, data analysis was critical to the study, Pasca di Magliano stresses. Those efforts were led by Steel, Kemp, and Veerin Sirihorachai, a graduate student in cancer biology.

"With single-cell sequencing especially, the actual acquisition of the data is relatively straightforward, but then analyzing the data is incredibly complex," di Magliano says.

In single-cell analysis, spatial information about the cells is lost. So the group, led by co-senior author Timothy Frankel, MD, an assistant professor of surgery, also used a technique called multiplex immunohistochemistry, which allows for the identification of multiple cell types within a tissue slide while preserving the position of tumor cells relative to components of the microenvironment.