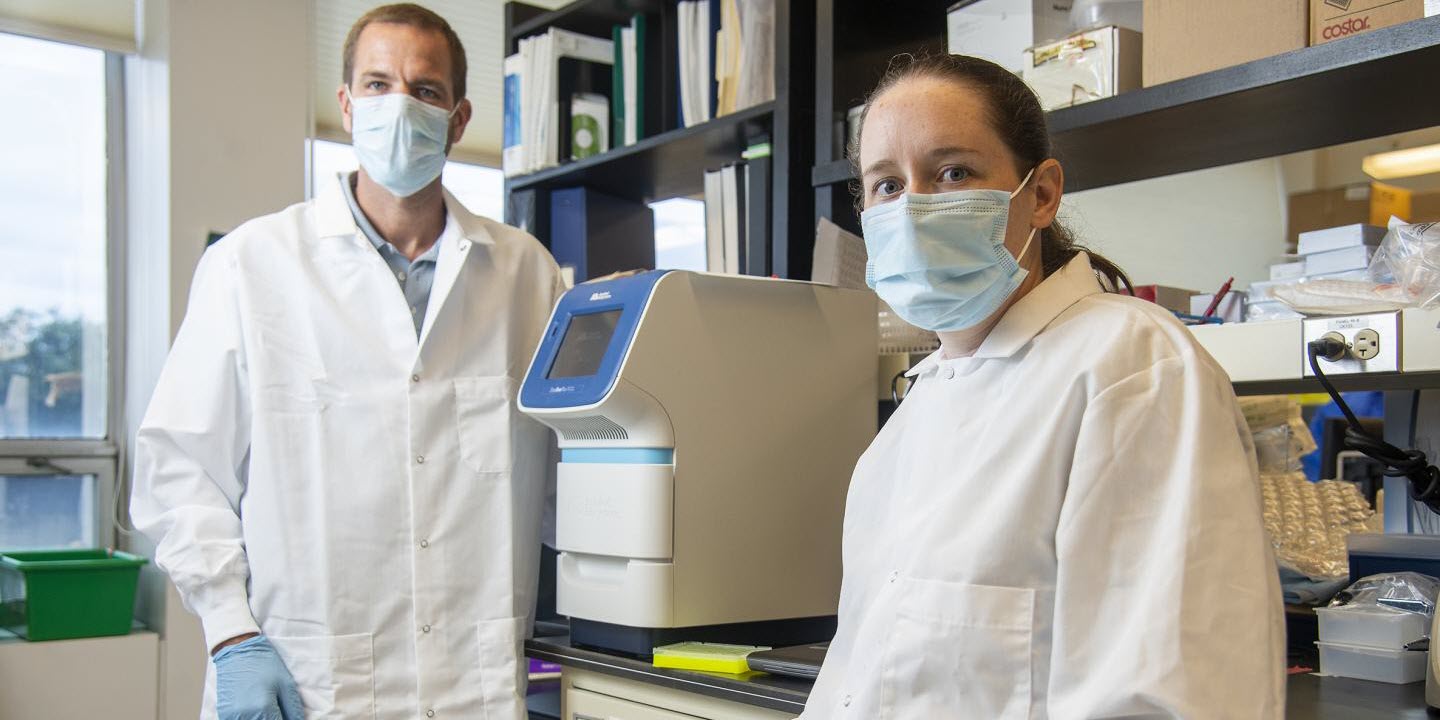 Jason Botten and Emily Bruce, who pioneered a streamlined COVID-19 test that doesn't use scarce chemicals, in their research lab in the University of Vermont's Larner College of Medicine. The machine between them is used to measure the presence and quantity of viral RNA in patient samples.
Brian Jenkins

A major roadblock to large scale testing for coronavirus infection in the developing world is a shortage of key chemicals, or reagents, needed for the test, specifically the ones used to extract the virus's genetic material, or RNA.

A team of scientists at the University of Vermont, working in partnership with a group at the University of Washington, has developed a method of testing for the COVID-19 virus that doesn't make use of these chemicals but still delivers an accurate result, paving the way for inexpensive, widely available testing in both developing countries and industrialized nations like the United States, where reagent supplies are again in short supply.

The method for the test, published Oct. 2 in PLOS Biology, omits the step in the widely used reverse transcription polymerase chain reaction (RT-PCR) test where the scarce reagents are needed.

The accuracy of the new test was evaluated by a team of researchers at the University of Washington led by Keith Jerome, director of the university's Molecular Virology Lab, using 215 COVID-19 samples that RT-PCR tests had shown were positive, with a range of viral loads, and 30 that were negative.

The positive samples the new test failed to catch had very low levels of the virus. Public health experts increasingly believe that ultra-sensitive tests that identify individuals with even the smallest viral loads are not needed to slow spread of the disease.

"It was a very positive result," said Jason Botten, an expert on pathogenic RNA viruses at the University of Vermont's Larner College of Medicine and senior author on the PLOS Biology paper. Botten's colleague Emily A. Bruce is the paper's first author.

"You can go for the perfect test, or you can use the one that's going to pick up the great majority of people and stop transmission," Botten said. "If the game now is focused on trying to find people who are infectious, there's no reason why this test shouldn't be front and center, especially in developing countries where there are often limited testing programs because of reagent and other supply shortages."

The standard PCR test has three steps, while this simpler version of the standard test has only two, Botten said.

"In step 1 of the RT-PCR test, you take the swab with the nasal sample, clip the end and place it in a vial of liquid, or medium. Any virus on the swab will transfer from the swab into the medium," he said. "In step 2, you take a small sample of the virus-containing medium and use chemical reagents, the ones that are often in short supply, to extract the viral RNA. In step 3, you use other chemicals to greatly amplify any viral genetic material that might be there. If virus was present, you'll get a positive signal."

"It takes a sample of the medium that held the nasal swab and goes directly to the third, amplification step," Botten said, removing the need for scarce RNA extraction reagents as well as significantly reducing the time, labor and costs required to extract viral RNA from the medium in step 2.

Botten said the test is ideally suited to screening programs, in both developed and developing countries, since it is inexpensive, takes much less processing time and reliably identifies those who are likely to spread the disease.

Its low cost and efficiency could extend testing capacity to groups not currently being tested, Botten said, including the asymptomatic, nursing home residents, essential workers, and schoolchildren. The standard RT-PCR test could be reserved for groups, like health care workers, where close to 100 percent accuracy is essential.

An influential pre-print points way to widespread adoption of test

The two-step test developed by the University of Vermont team first caught the attention of the scientific community in March, when preliminary results that accurately identified six positive and three negative Vermont samples were published as a preprint in bioRxiv, an open access repository for the biological sciences. The preprint was downloaded 18,000 times—in its first week, it ranked 17th among 15 million papers the site had published—and the abstract was viewed 40,000 times.

Botten heard from labs around the world who had seen the preprint and wanted to learn more about the new test.

"They said, 'I'm from Nigeria or the West Indies. We can't test, and people's lives are at stake. Can you help us?'"

Botten also heard from Syril Pettit, the director of HESI, the Health and Environmental Sciences Institute, a non-profit that marshals scientific expertise and methods to address a range of global health challenges, who had also seen the preprint.

Pettit asked Botten to join a think tank of likeminded scientists she was organizing whose goal was to increase global testing capacity for COVID-19. The test developed by the University of Vermont and University of Washington teams would serve as a centerpiece. To catalyze a global response, the group published a call to action in EMBO Molecular Medicine.

And it took action, reaching out to 10 laboratories in seven countries, including Brazil, Chile, Malawi, Nigeria, and Trinidad/Tobago, as well as the US and France, to see if they would be interested in giving the two-step test a trial run. "Universally, the response was yes," Pettit said.

The outreach led to a new HESI program called PROPAGATE. Each of the labs in the PROPAGATE Network will use the two-step test on a series of positive and negative samples sent to them by the University of Washington to see if they can replicate the results the university achieved.

The study has already shown promising results. One of the labs in Chile has also used the test on its own samples from the community and got accurate results.

"The goal is the make the two-step test accessible to any lab in the world facing these hurdles and see a broad uptake," she said.

- This press release was originally published on the UVM website