A recent report published in Science Translational Medicine by Medical University of South Carolina (MUSC) Hollings Cancer Center investigator Sophie Paczesny, MD, PhD, sheds light on immune cell biomarkers that may reveal which patients are most at risk for graft-versus-host disease (GVHD), a life-threatening condition that can arise after hematopoietic stem cell transplantation (HSCT) for treatment of liquid cancers such as leukemia.

"Allogeneic HSCT remains the only validated treatment to cure leukemia," explained Paczesny, chairwoman of the MUSC Department of Microbiology and Immunology. "In HSCT, donor-matched cells are infused into the bloodstream of sick patients and ultimately travel to the bone marrow. Some of these cells are immune cells, which help eliminate residual leukemic cells not killed by chemotherapy. Yet despite careful donor-recipient matching and use of immunosuppressive therapies following transplantation, some of the donor's immune cells may begin to attack the patient's tissues, which is called graft-versus-host disease."

GVHD impacts up to 50 percent of patients receiving HSCT and can manifest in multiple organs. About a third of those with GVHD experience localized effects within the gastrointestinal tract (GI-GVHD), which carries the highest risk for fatality.

Paczesny described the phenomenon further. "For patients with leukemia, you are providing donor cells that have a different biological, or antigen, signature as compared to the recipient. That is how these immune cells recognize the leukemia and destroy it. However, these antigens are also present in normal tissue, particularly in areas of the body with the most microbiota, like the gut. So that is where the donor immune cells attack and where symptoms are the hardest to treat."

Bone marrow-derived stem cells are referred to as multipotent, meaning they can mature into many different types of cells. This includes red and white blood cells as well as other immune cell types such as dendritic cells and T-cells that are responsible for balancing immunity and tolerance.

Dendritic cells exchange messages with T-cells by displaying short protein chains on the cell surface, called antigens. T-cells, which become activated when they recognize "non-self" antigens, then play a key role in triggering the body's other defense systems against foreign invaders that can include transplanted cells from a different host.

Previous work from the Paczesny laboratory has shown that immune cell signaling pathways in GI-GVHD increased numbers of "super activated" pathogenic T-cells (Th17 cells) in the blood of these patients. The presence of these aggressive T-cells correlated with lower survival as compared to patients either lacking GVHD or those with less severe forms of GVHD in the skin. These cells were also unique in their ability to be induced by a T-cell signaling receptor called ICOS, short for "inducible T-cell co-stimulator."

Because ICOS ligand is located on the surface of antigen-presenting cells, such as dendritic cells, it can easily be detected using existing technologies like flow cytometry that can scan for these external markers on cells in the blood. In this way, individuals who are actively developing symptoms of GI-GVHD following HSCT could potentially be flagged.

Djamilatou Adom, PhD, a postdoctoral fellow working with Paczesny, further explored the role of ICOS signaling in GI-GVHD using mice. First, they showed that genetic elimination of ICOS ligand production in donor-mouse bone marrow cells prior to transplanting them into recipient mice protected the recipient mice from GVHD-related death. Also, using "humanized" mice with nonfunctional immune systems, the researchers discovered that transplanting human ICOS ligand-expressing plasmacytoid dendritic cells into these mice (whose own bone marrow had been destroyed through radiation) led to GVHD with increased levels of Th17 cells within the intestines.

The involvement of plasmacytoid dendritic cells in GVHD was an interesting finding, said Paczesny. "If these cells are not stimulated, they are usually considered more tolerogenic. In other words, they are the good guys. They lessen the severity of GVHD. However, if they become T-cell activating—for instance the ICOS ligand is one of the factors that will activate them by binding ICOS—then they become more toxic and might drive the development of GVHD. This point has previously been controversial in the field; however, past studies have only looked at overall numbers of plasmacytoid dendritic cells in these patients, not the activation status of these cells."

A new drug target in GVHD

Next, Paczesny explored whether targeting cell-to-cell ICOSL-ICOS signaling might prevent GI-GVHD. Classical T-cell activation is induced by the CD28/B7 co-stimulation pathway, in concert with the recognition of foreign antigens by the T-cell receptor. The CD28/B7pathway can be disrupted by the currently approved drugs abatacept and belatacept (Figure 1). However, through mechanisms that are still not well understood, immune cells can escape the CD28/B7 pathway blockade by rerouting or reinforcing their activation through alternative costimulatory pathways like ICOS/ICOSL. 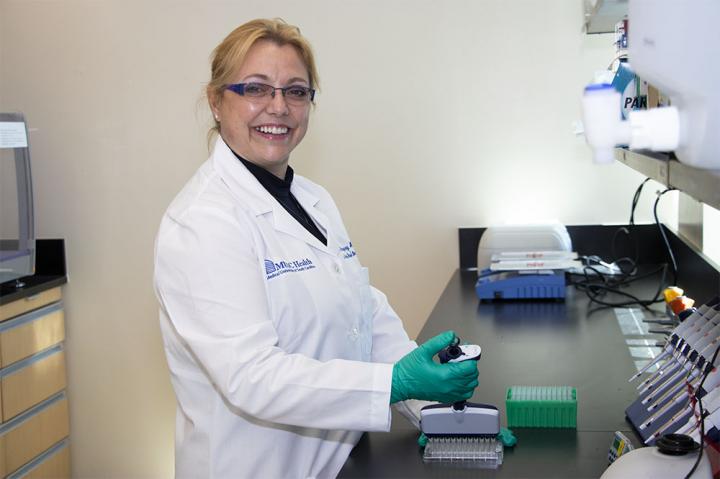 In collaboration with researchers at Alpine Immune Sciences in Seattle, Washington, Paczesny's team found that dosing mice with the drug candidate ALPN-101, a recombinant human Fc fusion molecule that binds and blocks both ICOS and CD28 on T-cells, conferred complete protection from GVHD while also preserving anti-tumor effects of the transplant. It also performed better than drugs targeting CD28 (belatacept) or ICOS pathways individually.

"This is the first time I've seen a drug work as a treatment for GVHD that also preserves anti-leukemic activity of HSCT. This is new," explained Paczesny. "What's also interesting is that the drug was effective when we provided it early, directly after transplantation, and also when we provided it as a later treatment, after disease had already built up. This is important because most of the time GVHD symptoms appear much later, and that's when we need to intervene."

Clinical trials with ALPN-101 have begun, and Paczesny hopes that her biomarker research, which was supported by more than $1.5 million in funding from the National Cancer Institute, will open doors for the treatment of GVHD and other immune-related diseases such as lupus.

"There has been a big jump in the number of transplantations recently because clinicians have improved their HSCT technique and expanded its applications. There is now also more demand for mitigation of allogeneic responses and more need because cellular therapies with third-party donors are also expanding. Therefore, GVHD will continue to be an issue. But now, we have a biomarker that, when it is elevated, will help us know when to begin a specifically targeted treatment."

- This press release was originally published on the MUSC website

Mutations in Donors’ Stem Cells May Cause Problems for Cancer Patients

Mutations in Donors’ Stem Cells May Cause Problems for Cancer Patients