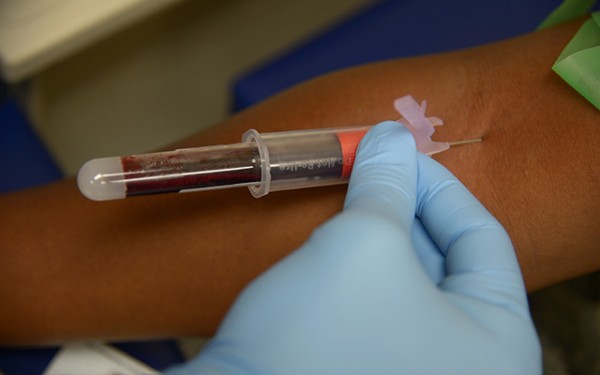 Detecting cancer at its earliest stages from a simple blood draw is the goal of several companies currently developing “liquid biopsies” to detect circulating human tumor DNA. Now UC San Diego researchers have demonstrated they can determine who has cancer, and what type, based on a readout of microbial DNA found in their blood.
MacDill Air Force Base

Newswise — When Gregory Poore was a freshman in college, his otherwise healthy grandmother was shocked to learn that she had late-stage pancreatic cancer. The condition was diagnosed in late December. She died in January.

“She had virtually no warning signs or symptoms,” Poore said. “No one could say why her cancer wasn’t detected earlier or why it was resistant to the treatment they tried.”

As Poore came to learn through his college studies, cancer has traditionally been considered a disease of the human genome—mutations in our genes allow cells to avoid death, proliferate and form tumors.

But when Poore saw a 2017 study in Science that showed how microbes invaded a majority of pancreatic cancers and were able to break down the main chemotherapy drug given to these patients, he was intrigued by the idea that bacteria and viruses might play a bigger role in cancer than anyone had previously considered.

Poore is currently an MD/PhD student at University of California San Diego School of Medicine, where he’s conducting his graduate thesis work in the lab of Rob Knight, PhD, professor and director of the Center for Microbiome Innovation.

Together with an interdisciplinary group of collaborators, Poore and Knight have developed a novel method to identify who has cancer, and often which type, by simply analyzing patterns of microbial DNA—bacterial and viral—present in their blood.

The study, published March 11, 2020 in Nature, may change how cancer is viewed, and diagnosed.

“Almost all previous cancer research efforts have assumed tumors are sterile environments, and ignored the complex interplay human cancer cells may have with the bacteria, viruses, and other microbes that live in and on our bodies,” Knight said.

“The number of microbial genes in our bodies vastly outnumbers the number of human genes, so it shouldn’t be surprising that they give us important clues to our health.”

The researchers first looked at microbial data available from The Cancer Genome Atlas, a database of the National Cancer Institute containing genomic and other information from thousands of patient tumors. To the team’s knowledge, it was the largest effort ever undertaken to identify microbial DNA in human sequencing data.

From 18,116 tumor samples, representing 10,481 patients with 33 different cancer types, emerged distinct microbial signatures, or patterns, associated with specific cancer types. Some were expected, such as the association between human papillomavirus (HPV) and cervical, head, and neck cancers, and the association between Fusobacterium species and gastrointestinal cancers. But the team also identified previously unknown microbial signatures that strongly discriminated between cancer types. For example, the presence of Faecalibacterium species distinguished colon cancer from other cancers.

The researchers then removed high-grade (stage III and IV) cancers from the dataset and found that many cancer types were still distinguishable at earlier stages when relying solely on blood-derived microbial data. The results held up even when the team performed the most stringent bioinformatics decontamination on the samples, which removed more than 90 percent of the microbial data.

To determine if these microbial patterns could be useful in the real world, Knight, Poore and team analyzed blood-derived plasma samples from 59 consenting patients with prostate cancer, 25 with lung cancer and 16 with melanoma, provided by collaborators at Moores Cancer Center at UC San Diego Health. Employing new tools they developed to minimize contamination, the researchers developed a readout of microbial signatures for each cancer patient sample and compared them to each other and to plasma samples from 69 healthy, HIV-negative volunteers, provided by the HIV Neurobehavioral Research Center at UC San Diego School of Medicine.

“The ability, in a single tube of blood, to have a comprehensive profile of the tumor’s DNA (nature) as well as the DNA of the patient’s microbiota (nurture), so to speak, is an important step forward in better understanding host-environment interactions in cancer,” said co-author Sandip Pravin Patel, MD, a medical oncologist and co-leader of experimental therapeutics at Moores Cancer Center at UC San Diego Health.

“With this approach, there is the potential to monitor these changes over time, not only as a diagnostic, but for long-term therapeutic monitoring. This could have major implications for the care of cancer patients, and in the early detection of cancer, if these results continue to hold up in further testing.”

According to Patel, diagnosis of most cancers currently requires surgical biopsy or removal of a sample from the suspected cancer site and analysis of the sample by experts who look for molecular markers associated with certain cancers. This approach can be invasive, time-consuming and costly.

Several companies are now developing “liquid biopsies"—methods to quickly diagnose specific cancers using a simple blood draw and technologies that allow them to detect cancer-specific human gene mutations in circulating DNA shed by tumors. This approach can already be used to monitor progression of tumors for some types of already-diagnosed cancers, but is not yet approved by the US Food and Drug Administration (FDA) for diagnostic use.

“While there has been amazing progress in the area of liquid biopsy and early cancer detection, current liquid biopsies aren’t yet able to reliably distinguish normal genetic variation from true early cancer, and they can’t pick up cancers where human genomic alterations aren’t known or aren’t detectable,” said Patel, who also serves as the deputy director of the San Diego Center for Precision Immunotherapy.

That’s why there’s often a risk that current liquid biopsies will return false-negative results in the setting of low disease burden. “It’s hard to find one very rare human gene mutation in a rare cell shed from a tumor,” Patel said. “They’re easy to overlook and you might be told you don’t have cancer, when you really do.”

According to the researchers, one advantage of cancer detection based on microbial DNA, compared to circulating human tumor DNA, is its diversity among different body sites. Human DNA, in contrast, is essentially the same throughout the body. By not relying on rare human DNA changes, the study suggests that blood-based microbial DNA readouts may be able to accurately detect the presence and type of cancers at earlier stages than current liquid biopsy tests, as well as for cancers that lack genetic mutations detectable by those platforms.

The researchers are quick to point out that there’s still the possibility blood-based microbial DNA readouts could miss signs of cancer and return a false-negative result. But they expect their new approach will become more accurate as they refine their machine learning models with more data.

And while false negatives may be less common with the microbial DNA approach, false positives—hearing you have cancer when you don’t—are still a risk.

Patel said that just because a cancer is detected early, it doesn’t mean it always requires immediate treatment. Some DNA changes are non-cancerous, changes related to aging, harmless or self-resolve. You would never know about them without the test. That’s why more screening and more cancer diagnoses might not always be a good thing, Patel said, and should be determined by expert clinicians.

The team also cautioned that even if a microbial readout indicates cancer, the patient would likely require additional tests to confirm the diagnosis, determine the stage of the tumor and identify its exact location.

Knight said many challenges still lay ahead as his team further develops these initial observations into an FDA-approved diagnostic test for cancer. Most of all, they need to validate their findings in a much larger and more diverse patient population, an expensive undertaking. They need to define what a “healthy” blood-based microbial readout might look like among many, diverse people. They’d also like to determine whether the microbial signatures they can detect in human blood are coming from live microbes, dead microbes, or dead microbes that have burst open, dispersing their contents—an insight that might help them refine and improve their approach.

To advance blood-based microbial DNA readouts through the next steps toward regulatory approval, commercialization and clinical application of a diagnostic test, Knight and Poore have filed patent applications and they founded a spinout company called Micronoma, with co-author Sandrine Miller-Montgomery, PhD, professor of practice in the Jacobs School of Engineering and executive director of the Center for Microbiome Innovation at UC San Diego.

The latest study may prompt important shifts in the field of cancer biology, Poore said.

“For example, it’s common practice for microbiologists to use many contamination controls in their experiments, but these have historically been rarely used in cancer studies,” he said. “We hope this study will encourage future cancer researchers to be ‘microbially conscious.’”

The researchers also suggest cancer diagnostics may only be the beginning for the newly discovered cancer-associated blood microbiome.

“This new understanding of the way microbial populations shift with cancer could open a completely new therapeutic avenue,” Miller-Montgomery said. “We now know the microbes are there, but what are they doing? And could we manipulate or mimic these microbes to treat cancer?” 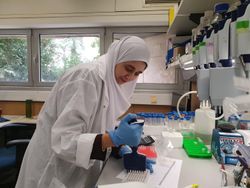 An End to Invasive Biopsies?

An End to Invasive Biopsies? 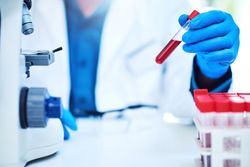