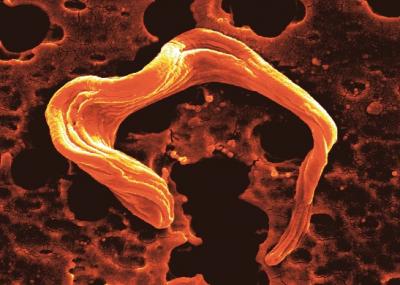 Lancaster University researchers have shed light on how the parasite which causes sleeping sickness multiples inside its host.

Human African Trypanosomiasis or sleeping sickness, only occurs in Sub-Saharan Africa where an estimated 60 million people in 36 countries are at risk.

Both subspecies are harbored by both wild and domestic animals which provide a reservoir of infection for Tsetse flies which then bite humans.

Research led by Dr. Mick Urbaniak with Dr. Corinna Benz of Lancaster University reveals that the parasite's cell division differs from that of humans and animals.

The paper published in PLoS Pathogens has identified many hundreds of proteins that were not previously known to be involved in the cell division cycle.

Dr. Urbaniak said: "Differences in the control in cell division may be exploited to create drugs that target the parasite but do not affect the human or animal host."

This is the first in-depth quantitative analysis of changes in the phosphoproteome that occur across the cell cycle in T. brucei. The identification of many hundred CCR phosphorylation sites confirms the importance of many known cell cycle proteins and implicates many more as having a potential role in the cell cycle.

"The data presented here will be of value to the trypanosome research community, and provides an important insight into mechanisms of post-transcriptional gene regulation that are likely to prove of relevance to the wider community as well."

The Hunt for Coronavirus Variants: How the New One Was Found and What We Know So Far

The Hunt for Coronavirus Variants: How the New One Was Found and What We Know So Far

WHO Names New B.1.1.529 Variant of Concern Detected in South Africa "Omicron"

WHO Names New B.1.1.529 Variant of Concern Detected in South Africa "Omicron"

Study Finds Relationship between Response to Influenza and Genetic Ancestry

Study Finds Relationship between Response to Influenza and Genetic Ancestry