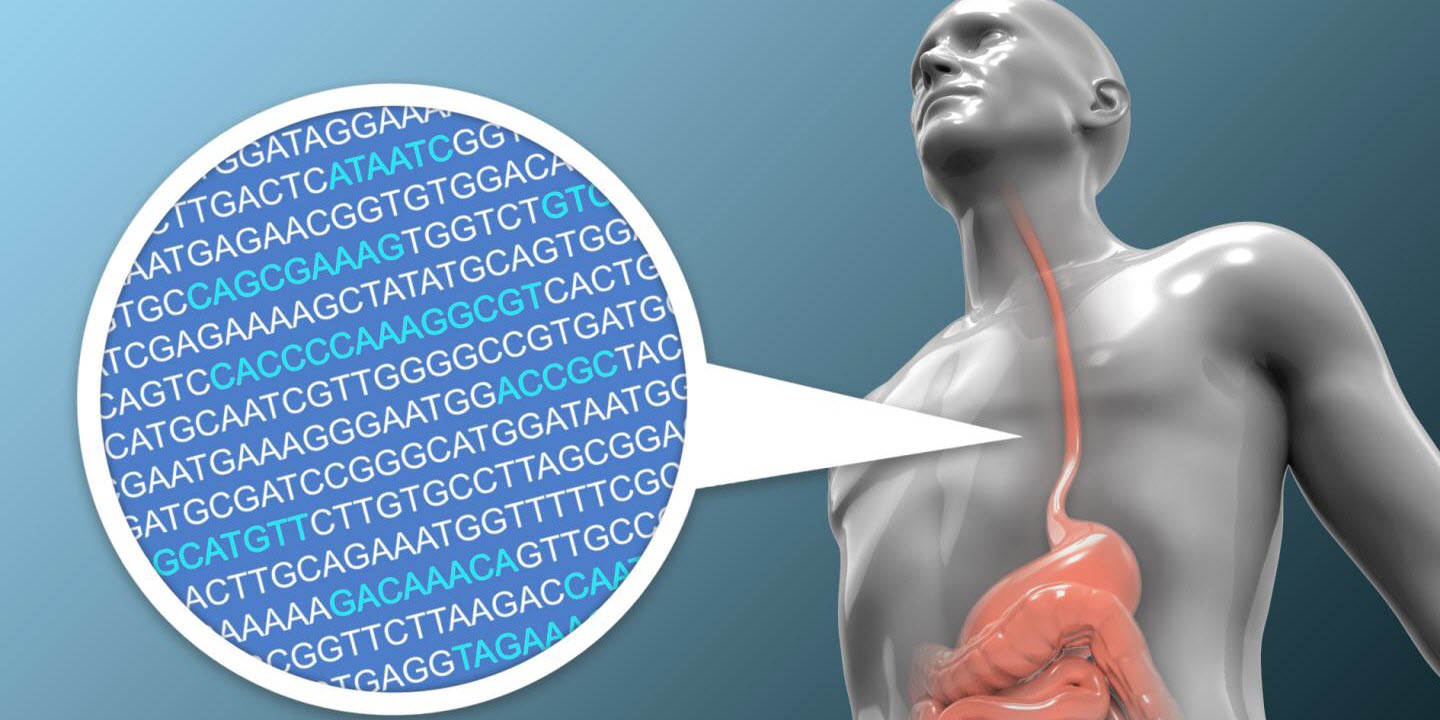 Recent cancer studies have shown that genomic mutations leading to cancer can occur years, or even decades, before a patient is diagnosed. Researchers have developed a statistical model that analyses genomic data to predict whether a patient has a high or low risk of developing esophageal cancer. The results could enable early detection and improve treatment of esophageal cancer in future.
Spence Phillips / EMBL-EBI

Esophageal cancer is the eighth most common cancer worldwide. It often develops from a condition called Barrett's esophagus. Existing monitoring and treatment methods are very intrusive, and many patients have to undergo burdensome procedures to ensure that no cancer is missed.

Researchers have now developed a statistical model that uses genomic data to accurately predict whether a patient with Barrett's esophagus has a high or low risk of developing cancer.

Genomics and statistics come together

Researchers at the University of Cambridge, EMBL's European Bioinformatics Institute (EMBL-EBI), and collaborators sequenced genomes from biopsies routinely collected from patients with Barrett's esophagus. These patients are monitored for early signs of esophageal cancer. The researchers used the data to look for differences between patients who were ultimately diagnosed with cancer and those who were not. The data were used to develop a statistical model measuring each patient's individual risk. The research was published in Nature Medicine.

Other recent cancer studies have shown that genomic mutations leading to cancer may occur many years before a patient is diagnosed with the disease. Being able to identify these mutations could provide a new route to early diagnosis and treatment.

"One of the unique things about this study was the richness of the data provided by colleagues at Addenbrooke's Hospital in Cambridge," explains Moritz Gerstung, group leader at EMBL-EBI. "These patients have been in surveillance for over 15 years, so overall we had over 800 samples, taken over time and from different areas of the esophagus. This allowed us to measure in great detail what type of genomic changes occur and how these trajectories differ between patients with and without cancer. Without such thorough surveillance programs, this study wouldn't have been possible."

The benefit of early detection

Although people with Barrett's esophagus are at considerably higher risk of developing esophageal cancer than the general population, only one patient in 300 will be diagnosed with cancer per year. Nevertheless, they all have to go through intrusive monitoring procedures every two years. This surveillance can be uncomfortable, stressful, and time consuming for the patients, and it places an additional burden on the health care system.

"The benefit of our method is twofold," explains Sarah Killcoyne, visiting postdoctoral fellow at EMBL-EBI. "The patients who have high-risk Barrett's, which is likely to become cancerous, can receive treatment earlier. And individuals who have something that looks genetically stable, and unlikely to develop into the disease, do not need to undergo such intense surveillance. The hope is that our method can help improve early detection and treatment, and decrease unnecessary treatment for low-risk patients, without compromising patient safety."

These results mean that patients at greatest risk can be treated immediately, rather than conducting repeated biopsies until early signs of cancer are found. Conversely, patients with low risk and stable disease can be monitored less frequently. Overall, the authors estimate that monitoring can be reduced for 50 percent of patients with Barrett's esophagus.

"This is an exciting example of how a collaboration between computational biologists and clinician scientists can bring new insights into an important clinical problem," says Rebecca Fitzgerald, professor of cancer prevention and MRC program leader at the University of Cambridge. "Esophageal cancer is devastating when it is diagnosed late, but early intervention can be performed endoscopically and spare patients unnecessary chemotherapy and removal of their esophagus. Similar approaches could be extended to other cancer types in the future."

According to the authors, the next steps are to refine the method, ideally by analyzing data from more patients. It is also important to bring in clinical information and improve the model's accuracy. Eventually, this will lead to clinical trials to show that this model is useful in clinical practice for patients currently in surveillance.

- This press release was originally published on the EMBL-EBI website