Two common variants in the KIF3A gene increase the risk of young children having a dysfunctional skin barrier and developing the skin condition atopic dermatitis. This, in turn, can allow environmental exposures to more easily cross the skin barrier and contribute to the development of food allergies and asthma as they grow up.

The study sheds new light on the genetic and molecular mechanisms at work in atopic dermatitis, a common condition (also known as eczema) that affects as many as 20 percent of all children. Although eczema usually resolves as children age, many children with disrupted skin barriers go on to develop more severe conditions including asthma and food allergies.

The study findings could make it easier to identify which children with eczema are most likely to progress to other allergic conditions. This would allow lifestyle interventions and other preventive therapies to be targeted toward high-risk children. The study also suggests a new target for potential treatment.

"Food allergies are rising and the causes are not entirely clear," Hershey says. "This study adds evidence to a rising theory that skin health is more closely connected to lung and gut health than many have suspected." 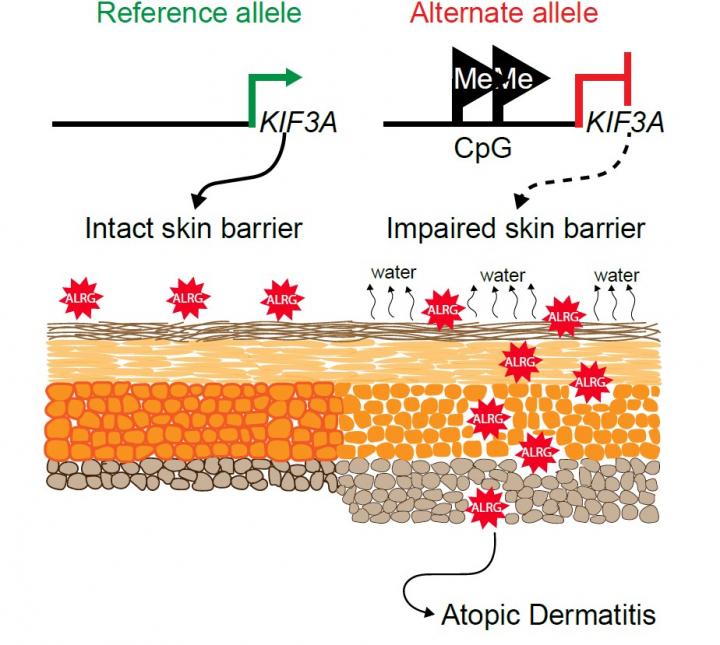 This graphical abstract shows how two variations in the gene KIF3A can disrupt the skin barrier, allowing allergens to penetrate into deeper layers.
Cincinnati Children's

A single nucleotide polymorphism (SNP) is a common genetic variation in a DNA sequence. In this study, researchers found two SNPs in the KIF3A gene that were confirmed through a series of experiments in children, as well as preclinical studies in mice, to play direct roles in developing eczema.

These SNPs (rs11740584 and rs2299007) are linked to increased water loss through the skin, dry skin, and the characteristic damage seen in atopic dermatitis. Measuring the rate of this type of water loss is one method for determining how severe a child's eczema may be.

Proper function of the KIF3A gene is important because it helps cells form their primary cilia, a structure on cell surfaces that acts as an antenna to receive important signal information from other cells. Previous studies led by experts at Cincinnati Children's and others have already shown that malfunctioning KIF3A in lung tissue can lead to asthma. Likewise, malfunctions of the same gene in gut tissues can increase risk of food allergies.

Now, this study helps connect both of these allergy risks to a damaged skin barrier, which allows more allergy-triggering substances to get inside our bodies to prompt immune system over-reactions.

"We are working to better understand how skin, gut and lung health are connected. In fact, we have a grant from the National Institutes of Health to further study this connection," Hershey says.

The research team at Cincinnati Children's has begun searching for drug compounds that might someday be useful in restoring the disrupted functions of the KIF3A gene. But the first next step based on this study will be to continue an ongoing hunt for a rapid screening test.

The new study in Nature Communications builds on findings from two other studies published earlier this year from Cincinnati Children's scientists.

The goal, Hershey says, would be to use skin tape strip samples to quantify KIF3A expression as a possible tool for predicting disease risk. The team is studying this approach in a group of 600 children from the Cincinnati region who were identified with atopic dermatitis early in life. This group, the first cohort of its kind in the US, will be followed for five years to directly evaluate the ability of KIF3A genetic variations and skin expression to predict disease risk.