Scientists have identified metabolites in the blood that accurately predict whether a woman with a history of gestational diabetes (GD) will develop type 2 diabetes (T2D) postpartum. This discovery could lead to a test that would help doctors identify patients at greatest risk and help them potentially avert the disease through interventions including diet and exercise.

About one in 10 women develop GD during pregnancy, which puts them at higher risk of T2D, with 30 to 50 percent of these women developing the disease within 10 years after delivery. Women with GD are recommended to have an annual oral glucose tolerance test after delivery, but the procedure is time and labor consuming and fewer than half of the women follow through with it.

Writing in PLOS Medicine in May 2020, a team of researchers examined whether a metabolic signature during the early postpartum period could accurately predict risk of progression from GD to T2D. They collected baseline blood samples from 1,035 women between six and nine weeks after birth and then annually over the following two years. The women's health was followed through their electronic medical records for up to 8 years. During this time, 173 women developed T2D and their blood samples were compared to 485 women enrolled in the study, matched for weight, age, race and ethnicity, who had not developed the disease.

The researchers found that significant dysmetabolism in lipids and amino acids in the early postpartum period was associated with future diabetes. They identified a small group of specific metabolites that could predict future T2D with 85 percent accuracy, surpassing current clinical methods. The researchers hope to turn their discovery into a simple blood test that women could take soon after delivery. 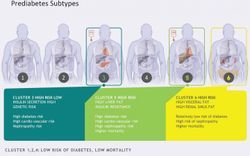