Biomedical engineers at Duke University led a multi-institution consortium to develop the process, which easily and precisely tracks changes in the number and shape of retinal ganglion cells in the eye.

This work appears in a paper published on May 3, 2021, in the journal Optica.

The retina of the eye is an extension of the central nervous system. Ganglion cells are one of the primary neurons in the eye that process and send visual information to the brain. In many neurodegenerative diseases like glaucoma, ganglion cells degenerate and disappear, leading to irreversible blindness. Traditionally, researchers use OCT, an imaging technology similar to ultrasound that uses light instead of sound, to peer beneath layers of eye tissue to diagnose and track the progression of glaucoma and other eye diseases.

Although OCT allows researchers to efficiently view the ganglion cell layer in the retina, the technique is only sensitive enough to show the thickness of the cell layer—it can't reveal individual ganglion cells. This hinders early diagnosis or rapid tracking of the disease progression, as large quantities of ganglion cells need to disappear before physicians can see the changes in thickness.

To remedy this, a recent technology called adaptive optics OCT (AO-OCT) enables imaging sensitive enough to view individual ganglion cells. Adaptive optics is a technology that minimizes the effect of optical aberrations that occur when examining the eye, which are a major limiting factor in achieving high-resolution in OCT imaging.

"This higher resolution makes it easier to diagnose neurodegenerative diseases," said Sina Farsiu, professor of biomedical engineering at Duke. "But it also generates such a large amount of data that image analysis has become a major bottleneck in wide utilization of this potentially game-changing technology in eye and brain research." 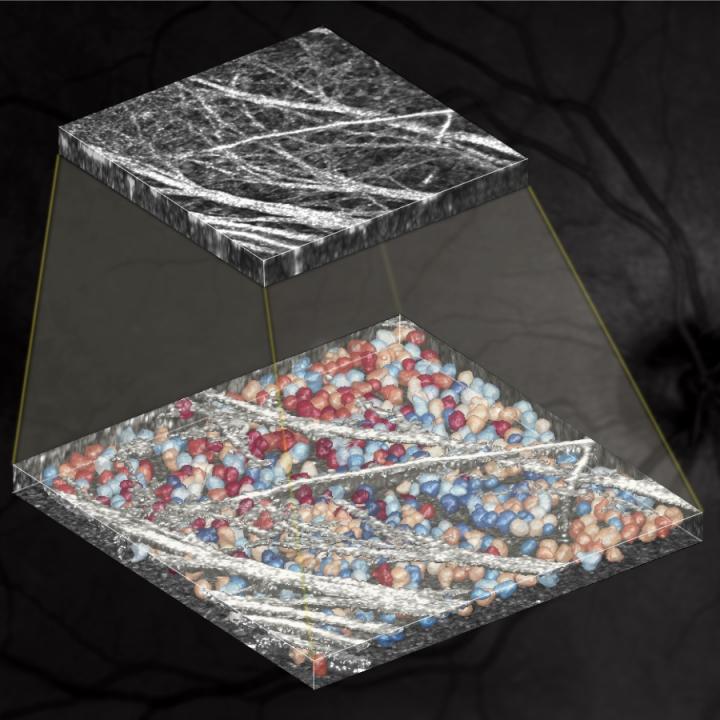 The graphic shows an image generated by AO-OCT (top), and the result of WeakGCSeg algorithms to identify and trace the shapes of the ganglion cells in the eye (bottom).
Sina Farsiu, Duke University

In their new paper, Farsiu and Somayyeh Soltanian-Zadeh, a postdoctoral researcher in Farsiu's lab, devise a solution to this problem by developing a highly adaptive and easy-to-train deep learning-based algorithm that is the first to identify and trace the shapes of ganglion cells from AO-OCT scans.

To test the accuracy of their approach, which they've dubbed WeakGCSeg, the team analyzed AO-OCT data from retinas of both healthy and glaucoma subjects. Their framework efficiently and accurately segmented ganglion cells from both samples, and identified which samples came from the glaucomatous eyes based on the number and size of ganglion cells present.

"Our experimental results showed that WeakGCSeg is actually superior to human experts, and it's superior to other state-of-the-art networks that can process volumetric biomedical images," said Soltanian-Zadeh.

In addition to diagnostic work, the team is optimistic that WeakGCSeg will make it easier to conduct clinical trials of therapies for neurodegenerative diseases. For example, if a study is testing a therapy for glaucoma, WeakGCSeg can see if the therapy has slowed down cell degeneration compared to the control group. With OCT alone, the first sign of change would require hundreds if not thousands of cells dying, which can take months or years.

"With our technique, you'd be able to quantify the earliest change," said Farsiu. "Your clinical trial may also be shorter because you can see and measure such an early effect, so there's a lot of potential here."

The team plans to continue their collaboration with colleagues at the Food and Drug Administration (FDA), Indiana University, and the University of Maryland to apply their technique to a larger cohort of patients. They are also hoping to extend WeakGCSeg to different cell types, like photoreceptors, and diseases of the eye, like retinitis pigmentosa and inherent retinal diseases.

WeakGCSeg also has the potential to improve diagnosis and tracking the progression of neurological diseases. According to Farsiu, previous studies have shown that changes in the ganglion cell layer are associated with various diseases of the central nervous system, like Alzheimer's disease, Parkinson's disease, and ALS. With their new technique, they can further study this connection and potentially discover helpful biomarkers for improved diagnosis and treatment for these and other neurodegenerative diseases.

"We're incredibly grateful to our collaborators at the FDA and Indiana University for providing us with samples to test WeakCGSeg," said Farsiu. "And this work could not have been possible without the pioneering works of Donald Miller at Indiana University and Zhuolin Liu and Daniel Hammer at FDA in advancing the AO-OCT imaging technology. It is exciting to see the impact of such in vivo single-neuron imaging technologies on health care in the next decade."