Breast cancer is the most frequently diagnosed cancer in women, and metastasis from the breast to other areas of the body is the leading cause of death in these patients. Detecting circulating tumor cells (CTCs) in the bloodstream could help doctors find and treat metastases at an earlier stage, increasing chances of survival. Now, researchers reporting in ACS Sensors have developed a method that could more sensitively detect CTCs within the complex environment of blood.

CTCs are tumor cells that are shed from a primary tumor into the bloodstream, where they can travel to other sites and possibly establish new tumors. Measuring CTCs could help doctors determine a patient's prognosis and best course of treatment, but these tumor cells are very rare compared with other blood cells, making them difficult to detect.

Although some technologies have been developed to identify CTCs in blood, they suffer from limited sensitivity and specificity. Therefore, Zai-Sheng Wu and colleagues wanted to find a way to boost a fluorescent signal for CTCs so that they could be more easily identified.

Related Article: The Key to Increased Sensitivity in Liquid Biopsy

To develop their method, the researchers chose a breast cancer cell line that, like many breast tumors, produces large amounts of two proteins, ErbB-2 and EpCAM. They isolated the breast cancer cells from a buffer solution with magnetic beads attached to antibodies against ErbB-2.

Then, they added a strand of DNA that contained multiple copies of a single-stranded DNA sequence, called an aptamer, that recognizes EpCAM. The strand also carried short DNA sequences that could be used to perform an enzymatic amplification reaction to create many new copies that could bind to fluorescent probes.

Using fluorescence spectrometry, as few as nine breast cancer cells could be detected in 200 μL of buffer solution. When the team spiked breast cancer cells into whole blood, they observed a similar fluorescent signal as in the buffer, suggesting that the assay could be a powerful tool for screening rare CTCs in real samples.

- This press release was provided by the American Chemical Society 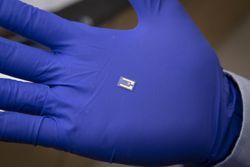