Approximately 90 percent of people who experience an out-of-hospital cardiac arrest die. Researchers around the world are using the latest cutting-edge technologies to improve outcomes for these patients. To address diseases such as sudden cardiac arrest (SCA), Dr. Dayanjan Wijesinghe, assistant professor of pharmacotherapy and outcomes science at Virginia Commonwealth University, is pioneering an innovative approach to experimental biomedical science, which he refers to as “lights out science.”

In manufacturing, “lights out” refers to the full automation of manufacturing processes, so that no human presence is required on-site in factories. Wijesinghe’s approach to scientific experimentation and discovery employs tools such as artificial intelligence to help automatically process and analyze enormous amounts of data to arrive at novel findings and conclusions. Moreover, he is looking to apply these tools in a clinical setting to deliver personalized medicine solutions. This requires the development of disease-specific companion diagnostics as well as precision treatments to ensure that the right therapy is prescribed at the right time for the right patient.

For companion diagnostics, biomarkers must be identified that can stratify patients to facilitate the selection of an optimal treatment option from a raft of potential therapies. To isolate SCA biomarkers, shed more light on the disease etiology, and identify optimal treatment pathways for distinct patient populations, Wijesinghe has analyzed the lipidomic and metabolomic profiles of patients with SCA. While genomic biomarkers are useful, they are limited as they do not reflect the impact of a person’s lifestyle choices. For medical conditions where environmental and lifestyle factors can greatly determine a disease state and its onset, other -omic biomarkers that do reflect these factors may provide greater utility. For example, metabolomic profiles are better able to represent the dynamic processes within an individual’s body at any given time.

Just as improvements in technical capabilities enabled the acceleration of the mapping of the human genome, advances in liquid chromatography (LC) coupled with mass spectrometry (MS) have enabled life scientists to look more deeply into many other, arguably more complex, -omics. Compared with the human genome, which contains about 20,000 to 25,000 genes, the human metabolome and lipidome is postulated to comprise more than 300,000 molecular species, many of which have yet to be fully annotated and identified. Being able to detect and distinguish so many metabolites and lipids from complex biological samples is a challenging task, especially as the majority of these species are small molecules with a mass that falls within a relatively narrow range of 50 to 1,500 Daltons. Advanced analytical instruments and methods have been developed to address this challenge (see Figure 1).

Ultra-high-performance LC (UPLC) separates metabolites and lipids by their chemical properties such as hydrophobicity, while high resolution MS (HRMS) converts them to gas phase ions and then separates them by mass to charge (m/z) ratio. By coupling these two technologies, species with the same m/z ratio can be clearly distinguished by their different chemical properties. The resolution is so high that oxidized forms of phospholipids can be discriminated from their non-oxidized forms, which is biologically meaningful as oxidative states significantly affect the function of phospholipids. These versatile, accurate, and precise high-resolution methods are also very sensitive and can detect even very low abundance species present at nano- and pico-molar levels. As such, LC-HRMS performed using tandem quadrupole time-of-flight (QTOF) mass analyzers is rapidly emerging as the analytical technique of choice for metabolomic and lipidomic studies.

The first step to identifying metabolomic and lipidomic biomarkers is to comprehensively analyze biological samples from patients, such as those who have had a SCA, and from appropriate controls. The metabolomic and lipidomic profiles are then compared to isolate metabolites and lipids that are specific to the disease state. Wijesinghe and his team accomplished this using a comprehensive and fast MS/MSALL scan in conjunction with SWATH Acquisition on the advanced analytical mass analyzer, SCIEX TripleTOF® 5600+, with an UPLC front-end (see Figure 1). The sheer volume of data that needed to be processed posed a challenge. A further hurdle was that many of the species isolated in the metabolomic and lipidomic profiles of SCA patients were unknown. Identifying each of these unknowns using traditional methods would have taken an inordinate amount of time and much manual work, so Wijesinghe decided to harness digital technologies to automate and thus expedite the process. He and his team developed a deep neural network (DNN) algorithm, a form of AI, which was trained using an SCA dataset of about 217 known lipids. The algorithm was then able to make predictions about the identity of unknown species based on their m/z ratio, and sure enough, when it was applied to the experimental SCA data, around 15 percent of the unknown species were correctly identified. 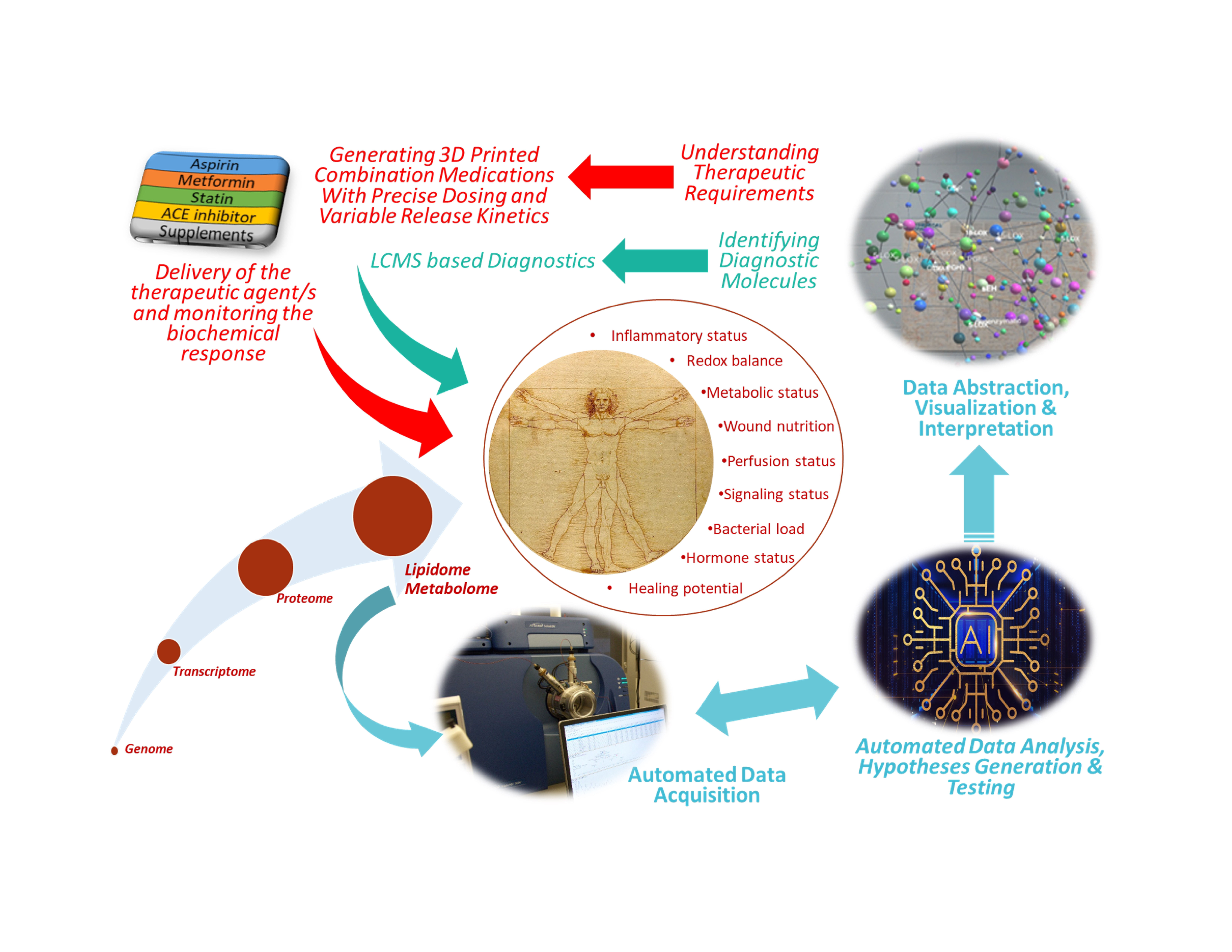 Figure 1. A schematic of an analytical workflow for a metabolomics and lipidomics study. The workflow starts with sample collection from patients and healthy controls. The samples are then analyzed using comprehensive, untargeted LC-HRMS scans, which isolates molecular species that correlate with the disease. These species are then identified, and the data analyzed using statistical chemometric-based programs. Conclusions are then drawn from these data and hypotheses generated regarding specific biomarkers. These conclusions are then confirmed, and hypotheses tested by running a targeted LC-HRMS analysis with samples from a larger cohort of patients. Thus, the biomarkers are validated through the targeted analysis and may be used to improve diagnostic or therapeutic interventions.

Following on the success of this algorithm, Wijesinghe conceived of using yet another AI application—natural language processing (NLP)—to process all published literature and databases online to try and elucidate more about each of the potential biomarkers. The AI system generated hypotheses regarding the biomarkers that could then be tested through further LC-HRMS analyses of metabolomic and lipidomic profiles. This time though, the analyses were targeted, focusing on the specific species postulated as biomarkers. The data generated by these targeted scans were again processed and interrogated using a DNN algorithm and further analyzed using NLP of related published literature and data to allow successive hypotheses to be generated and tested, and validated findings narrowed down until critical disease-specific biomarkers were identified (see Figure 1). The resulting list of confirmed molecules correlating to the specific disease and its pathologies can be used to potentially develop a better diagnostic test and precision treatment. Finally, information thus obtained needs to be abstracted, summarized, and visualized in a manner that is quickly digestible by the human mind. Wijesinghe’s research group is addressing this final piece of the puzzle via the use of immersive virtual reality (VR)- and augmented reality (AR)-based approaches.

This workflow and approach have already been applied to better understand the disease and recovery mechanisms in SCA and has led to the identification of novel candidate biomarkers for precision medicine. Moreover, it may one day be possible to rapidly deploy diagnostic tools utilizing dedicated LC-HRMS technologies to quickly analyze the -omic profiles of patients. Such profiling would offer a much more comprehensive view of their health status and medical condition than is currently possible in a clinical setting, empowering physicians and patients alike to make better-informed clinical decisions.

Wijesinghe envisages a future where patients admitted to hospital will be routinely profiled for multiple omics, such as genomics, proteomics, lipidomics, and metabolics. These analyses will be performed on their biological samples within hours of their admittance to the clinic, including automated data processing and interrogation using AI-based algorithms, and reference to knowledge banks using NLP, to produce meaningful personalized conclusions such as potential diagnoses and treatment recommendations.