Cancer survival plummets sharply as the disease stage advances and metastasis occurs. For non-metastatic disease, smaller tumors translate to a better prognosis and even for metastatic disease, lower tumor burden with smaller lesions is easier to treat than high metastatic tumor burden. These observations lead to an important conclusion: prompt cancer detection leading to earlier intervention would improve patient prospects and save lives.

The emergence of liquid biopsies on biofluids, such as blood or cerebrospinal fluid, has been hailed as a major advance in cancer diagnostics. The technique can assay a variety of tumor biomarkers, including circulating tumor cells (CTCs), cell-free circulating tumor DNA (ctDNA), RNA exosomes, and tumor-derived proteins and phosphoproteins. CTCs are believed to slough off tumors and, although relatively rare, become more frequent in metastatic disease. Similarly, ctDNA, which arises from dying tumor cells that shed their DNA, become more abundant as cancer progresses. A parallel observation has been seen in higher cancer protein levels and later stage cancer.

Sensitive methods with low limits of detection, some of which are FDA-approved, have made it feasible to detect tumor biomarkers in liquid biopsies. For instance, the cobas EGFR Mutation Test v2 detects exon 19 deletions or exon 21 (L858R) mutations in the epidermal growth factor receptor (EGFR) gene to identify which non-small cell lung carcinoma (NSCLC) patients would benefit from targeted erlotinib therapy.

A duo does the job

Recently, researchers addressed these shortcomings of liquid biopsies by combining ctDNA and protein detection in a multi-analyte blood assay. With this approach, the researchers were able to vastly enhance the specificity and sensitivity of their assay.

Previously, liquid biopsies either assayed ctDNA or proteins. ctDNA is superbly specific since these somatic mutations are exclusively associated with tumors. However, massively parallel sequencing is too error prone to reliably detect rare ctDNA mutations among abundant non-mutant DNA. On the other hand, although proteins can be quantified reliably, they are not sufficiently specific. For instance, carbohydrate antigen 19-9 (CA 19-9), a widely used biomarker of pancreatic cancer, can arise in other diseases such as benign jaundice or in asymptotic individuals, or it may even be absent in patients with pancreatic cancer.

In an initial study of pancreatic ductal adenocarcinoma (PDAC), the researchers tested out their dual ctDNA and protein assay. Only patients with early-stage IA, IB, IIA, and IIB were recruited. A large cohort of presumed healthy, symptom-free individuals was included as a control. The authors employed a sensitive PCR method, Safe-Sequencing System (Safe-SeqS) to detect KRAS mutations, the most frequently mutated gene in PDAC, specifically at codons 12 and 61, which compromise the majority of mutations. Using this technique, mutant KRAS ctDNA was detected in 30 percent of patients, but only one (0.05 percent) of the controls.

Next, the authors combined KRAS Safe-SeqS with CA 19-9 quantification, using a previously established cut-off value. They found that they could now identify 60 percent of PDAC cases compared to the 30 percent identified by ctDNA alone. The sensitivity was further increased to 64 percent by adding carcinoembryonic antigen (CEA), hepatocyte growth factor (HGF), and osteopontin (OPN) protein quantification to the analysis.

Not only did the dual assay enhance detection, but it also had a high specificity of 99.5 percent. Since cancer is relatively rare in the net population, specificity is essential to prevent false positives, which may raise unnecessary distress and alarm in healthy individuals.

Seeking out other cancers

The same research group applied their multi-analyte principle in a follow-up study, which they dubbed CancerSEEK. This time they tested it on a more extensive panel of cancers, including ovarian, liver, stomach, pancreatic, esophageal, colorectal, lung, and breast. As before, all recruited patients were in the earlier stages of disease with resectable tumors to mimic early detection. Again, a PCR method was devised to simultaneously detect mutations in 16 genes that were most frequently mutated among the cancer panel. These results were combined with analysis of eight proteins that were associated across the cancer panel: CA19-9, CEA, HGF, OPN, cancer antigen 125 (CA-125), myeloperoxidase (MPO), prolactin (PRL), and tissue inhibitor of metalloproteinases 1 (TIMP-1). Cumulatively, CancerSEEK detected tumors with a median sensitivity of 70 percent, which varied from a low of 33 percent for breast tumors and a high of 98 percent for ovarian tumors, with specificity greater than 99 percent across the board. Of these, ovarian, liver, stomach, pancreatic, and esophageal cancer do not currently have readily available screening tests, making CancerSEEK especially relevant.

In addition to identifying early-stage cancer, the authors wanted to see if they could identify the organ affected by the tumor. Using only ctDNA and protein biomarker levels along with patient gender as input into a machine learning algorithm, they were able to pinpoint tumor location to one or two sites in a median of 83 percent of patients across the various types of cancer. This information would be useful for a clinician guiding the next battery of tests for a patient, e.g. a mammogram for breast cancer or colonoscopy for colorectal cancer.

Although promising, the authors noted a few shortcomings of their studies. In the first PDAC study, although their test could detect cancer in 64 percent of cases, it wasn’t detected at a sufficiently early stage to impact survival. The sensitivity of the test would need to be improved further to detect even earlier stage cancer. Additionally, the controls were healthy in both studies, whereas in real life, screened individuals may have other medical conditions that could interfere with the CancerSEEK results.

The authors estimate that their test would cost less than $500, commensurate with other tests for cancer detection. They also suggest that combining additional tumor biomarkers, such as metabolites, RNA, or methylated DNA, could enhance the specificity and sensitivity of their assay further. They do acknowledge that the test does not in itself constitute a definitive diagnosis of cancer, but that it may be used to identity individuals that require further clinical evaluation for cancer. As improvements are made to CancerSEEK and other liquid biopsy techniques, the hope is that preemptive screening, particularly for at-risk individuals, will eventually help detect cancer early enough to improve patient prognosis. 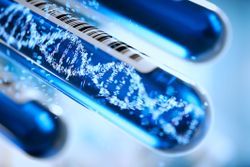