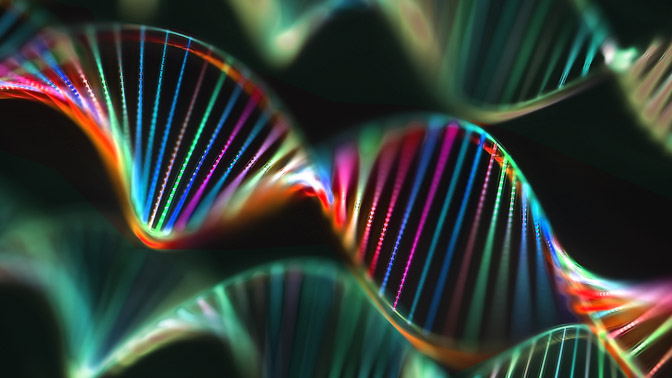 Short interspersed nuclear elements are ancient stretches of DNA with functions that are just beginning to be discovered. These elements make up around one tenth of the entire human genome.
University health network

One such strategy, known as ‘viral mimicry’, was previously discovered by a team of researchers at the Princess Margaret Cancer Centre led by senior scientist Dr. Daniel De Carvalho.

Now, recent findings from the same group, published in Nature, reveal a way to enhance the strategy to better target cancer cells.

Viral mimicry involves activating the production of double-stranded RNA (dsRNA) in the cell—a molecule that is typically found in viruses and is a ‘red flag’ that notifies the immune system of an infection. By producing dsRNA in cancer cells, the process mimics an infection and instructs the body to initiate an anticancer immune response.

Until now, the origin of immunogenic dsRNAs were unknown. In the current study, De Carvalho’s group found that ancient regions of DNA known as short interspersed nuclear elements (SINEs) are the source of these dsRNAs. Furthermore, certain drugs can specifically reactivate SINEs in cancer cells.

Discussing the role of SINEs in health, De Carvalho comments, “Humans acquired a series of ‘silent’ repetitive elements in our DNA over millions of years of evolution, but it has been unclear why or what purpose they serve. We set out to identify their function and have found that under the right conditions, they can be reactivated and stimulate our immune system.”

The current findings have added to this initial discovery by revealing the existence of a critical enzyme—known as ADAR1—that is used by cancer cells to evade the immune response induced by viral mimicry.

The study found that when cancer cells produce ADAR1, the dsRNA produced by the ancient DNA is disrupted. Furthermore, the research team showed that inhibiting ADAR1 made cancer cells more sensitive to drugs that induce viral mimicry.

“Since the ADAR1 activity is enzymatic, our work provides an exciting new target for drug development efforts and lays the foundation for the development of a completely new class of drugs that are able to exploit these ‘ancient weapons’ in our genome.” says Dr. De Carvalho.