New research from the University of Nebraska-Lincoln has shown that the mutations arising in the COVID-19-causing SARS-CoV-2 virus seem to run in the family—or at least the genus of coronaviruses most dangerous to humans.

After comparing the early evolution of SARS-CoV-2 against that of its closest relatives, the betacoronaviruses, the Nebraska team found that SARS-CoV-2 mutations are occurring in essentially the same locations, both genetically and structurally.

The mutational similarities between SARS-CoV-2 and its predecessors, including the human-infecting SARS-CoV-1 and MERS-CoV, could help inform predictions of how the COVID-causing virus will continue to evolve, the researchers said.

"The problem of looking at only one virus at a time is that you lose the forest for the trees," said Katherine LaTourrette, a doctoral student in the Complex Biosystems program at Nebraska. "By looking at this big picture, we were able to predict the mutational nature of SARS-CoV-2.

That gets into these questions of: Are vaccines going to be effective long term? Which variants are going to sneak by? Do we need that booster shot? Are vaccinated people going to be infected a second time?"

You're more likely to be hitting that bull's-eye

The genetic code of a virus determines its ability to infect cells and direct them to churn out more copies of itself. That code consists of fundamental compounds, or nucleotides, with mutations occurring wherever those nucleotides get added, subtracted, or swapped for one another. Many mutations have little or no effect, in the same way that trying to hack an intricate password by changing just one character will likely fail.

But given enough chances, a virus will eventually happen upon a mutation or mutations that change the assembly of its structural joints, or amino acids, enough to help it better invade cells and replicate—advantages that help it outcompete other strains. In some cases, a new strain can also evade the immune responses stirred by existing vaccines, necessitating the development of new vaccines to protect against it.

LaTourrette and her adviser, Hernan Garcia-Ruiz, were busy comparing mutational patterns across viruses that invade a different biological kingdom—plants—when the SARS-CoV-2 pandemic struck. To do it, the researchers were analyzing segments of sequenced DNA from parallel locations on the genomes of all viruses in a genus. They were hunting specifically for single-point mutations: segments in which just one nucleotide had changed. By pinpointing them, the team was sussing out whether certain mutations pop up across related plant viruses, then tracing those mutations to functional amino acid changes in the viruses.

"A lot of times, researchers have a specific plant virus they study," LaTourrette said. "They know it really well. But our question was: Big picture, what is the genus doing? We know that variation isn't random. It accumulates in specific areas of the genome, and those areas are (sometimes) consistent across the genus. Those tend to be areas important for things like host adaptation—basically, areas that are going to need to keep changing in order to keep co-evolving with their host.

"So when COVID-19 happened, we thought, well, we can download the (betacoronavirus) sequences and run them through the pipeline and see where the variation is occurring."

When they did, LaTourrette and her colleagues found that the so-called spike protein, which protrudes from betacoronaviruses and keys their entry into host cells by binding with receptors on the surface, mutates rapidly across all known betacoronaviruses, including SARS-CoV-2.

Despite accounting for just 17 percent of the SARS-CoV-2 genome, the "hyper-variable" spike protein has so far accumulated roughly 50 percent of the virus's total mutations, the researchers discovered. Those mutations are emerging in the same regions of the genome, and even the same sub-units of the spike protein, as they have in every other betacoronavirus to date.

"All of our analyses showed that that's really where the variation is happening," LaTourrette said. "It didn't matter when we looked at it, what variant we looked at—the spike protein was key."

Image Container (remove this text once done styling the container) 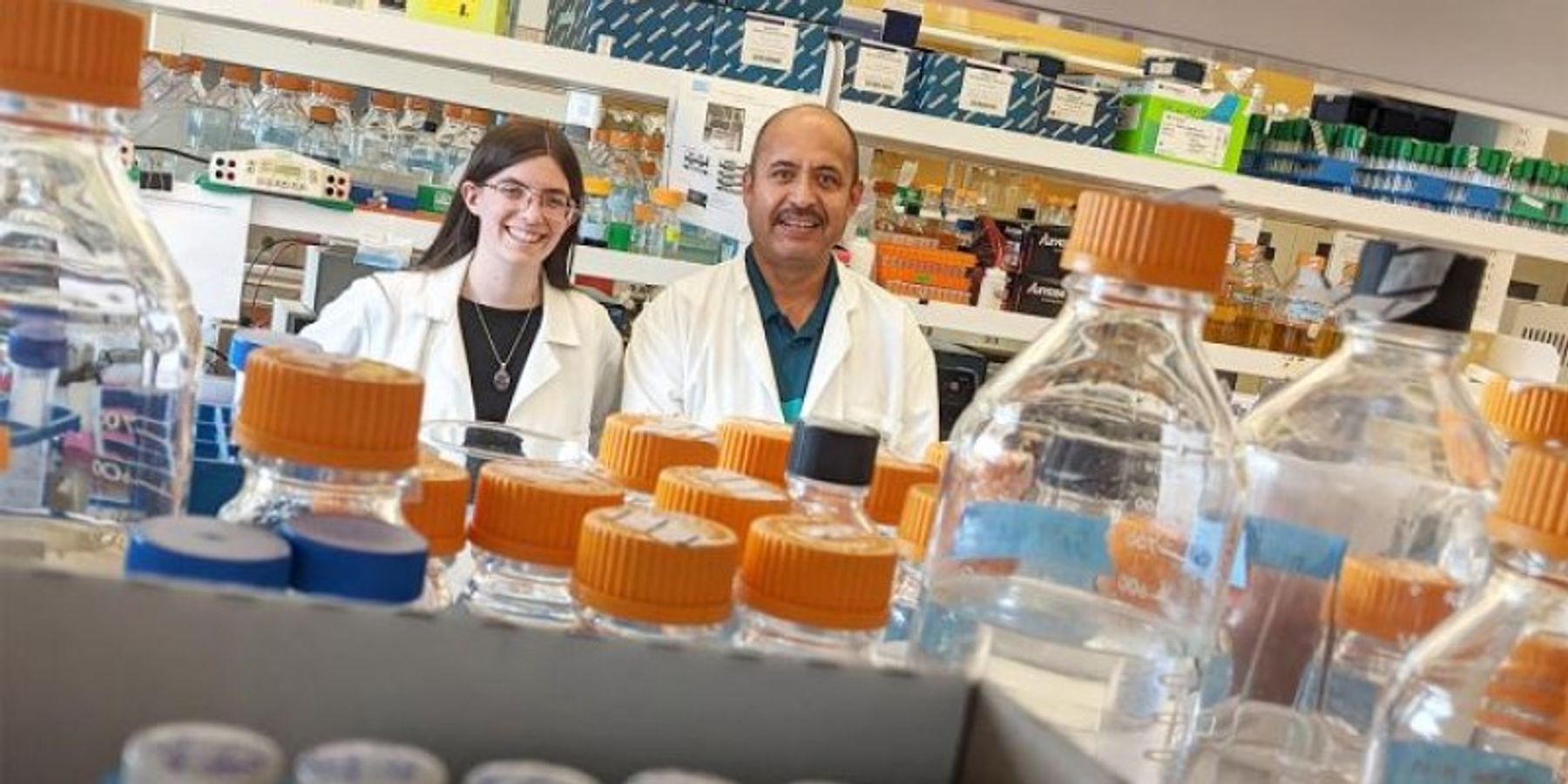 When the coronavirus pandemic struck, Nebraska's Katherine LaTourrette (left) and her doctoral adviser, Hernan Garcia-Ruiz, were busy researching plant viruses. The lab responded by turning its analytical tools to the study of betacoronaviruses, which include the COVID-19-causing SARS-CoV-2.
Scott Schrage, University of Nebraska-Lincoln

The team also concluded, as other virologists have, that the SARS-CoV-2 spike protein is disordered—that while its amino acids assemble into the same general architecture, that architecture has what LaTourrette called "some wiggle room" to shift into slightly different configurations. That's bad news, she said, given that its structural flexibility likely gives it some functional wiggle room, too.

"Humans may have slightly different cell receptors, person to person," LaTourrette said. "So then you have to have a (spike protein) receptor that can accommodate those little shifts. If it were very ordered, and it couldn't shift, then maybe it couldn't infect everyone. But by having that flexibility, it's a much better virus.

Basically, this area is hyper-variable, and it's flexible. So it's the double whammy."

Those qualities will continue to make SARS-CoV-2 a formidable foe that requires vigilance to stave off for the foreseeable future, LaTourrette said. But knowing its strengths, and that the evolutionary history of other betacoronaviruses might serve as a reasonable preview of that future, should help virologists and vaccinologists strategize accordingly.

Vaccines may have to continue targeting the distinctive spike protein as SARS-CoV-2 evolves, but consulting the mutational patterns of betacoronaviruses could help researchers forecast which domains of the protein are most and least likely to mutate. And that could make a moving target much easier to hit, LaTourrette said.

"If you close your eyes when you're throwing a dart at a dartboard, it could go anywhere," she said. "But by looking at the other (betacoronavirus) species, you have an idea of where it's likely to land. And you're more likely to be hitting that bull's-eye."

Though LaTourrette has already returned to the kingdom of plants, she said the opportunity to adapt her work to such a pressing purpose proved gratifying at a time when gratification was in short supply.

"For us, getting to (transition) from plants to coronaviruses was a really positive way of showing that you can take your science and your knowledge, and you can apply it to the benefit of society," LaTourrette said. "We've seen some really great examples in the past year-and-a-half of groups making that shift.

"Even though this is a very difficult time, and there's a lot of hardship, I think it's really positive to see scientists come together and be able to contribute to a cause together."