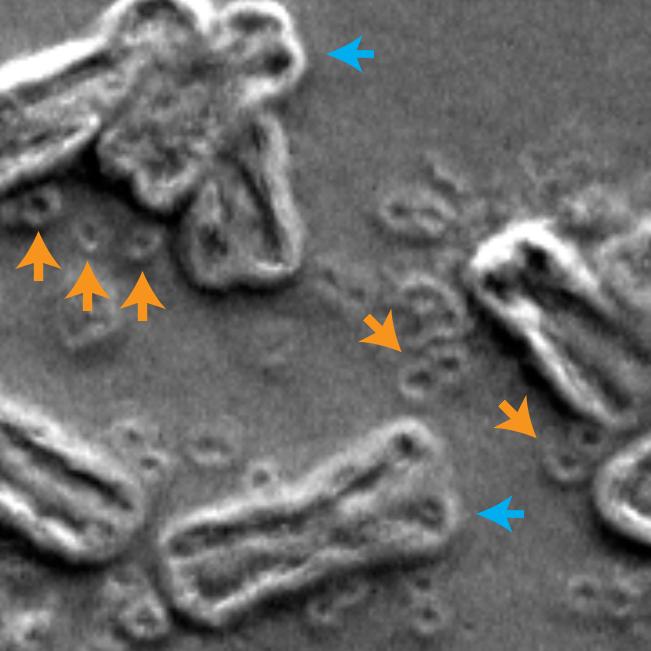 In this scanning electron micrograph of inside the nucleus of a cancer cell, chromosomes are indicated by blue arrows and circular extra-chromosomal DNA are indicated by orange arrows.
UC San Diego Health Sciences

Cancer is one of the world's greatest health afflictions because, unlike some diseases, it is a moving target, constantly evolving to evade and resist treatment.

In a paper published in the December 23, 2020, online issue of Nature, researchers at University of California San Diego School of Medicine and the UC San Diego branch of the Ludwig Institute for Cancer Research, with colleagues in New York and the United Kingdom, describe how a phenomenon known as "chromothripsis" breaks up chromosomes, which then reassemble in ways that ultimately promote cancer cell growth.

Chromothripsis is a catastrophic mutational event in a cell's history that involves massive rearrangement of its genome, as opposed to a gradual acquisition of rearrangements and mutations over time. Genomic rearrangement is a key characteristic of many cancers, allowing mutated cells to grow, or grow faster, unaffected by anti-cancer therapies.

"These rearrangements can occur in a single step," said first author Ofer Shoshani, PhD, a postdoctoral fellow in the lab of the paper's co-senior author Don Cleveland, PhD, professor of medicine, neurosciences and cellular and molecular medicine at UC San Diego School of Medicine.

"During chromothripsis, a chromosome in a cell is shattered into many pieces, hundreds in some cases, followed by reassembly in a shuffled order. Some pieces get lost while others persist as extra-chromosomal DNA (ecDNA). Some of these ecDNA elements promote cancer cell growth and form minute-sized chromosomes called 'double minutes.'"

Research published last year by scientists at the UC San Diego branch of the Ludwig Institute for Cancer Research found that up to half of all cancer cells in many types of cancers contain ecDNA carrying cancer-promoting genes.

In the latest study, Cleveland, Shoshani, and colleagues employed direct visualization of chromosome structure to identify the steps in gene amplification and the mechanism underlying resistance to methotrexate, one of the earliest chemotherapy drugs still widely used.

The scientists also identified how chromothripsis drives ecDNA formation after gene amplification inside a chromosome.

"Chromothripsis converts intra-chromosomal amplifications [internal] into extra-chromosomal [external] amplifications and that amplified ecDNA can then reintegrate into chromosomal locations in response to DNA damage from chemotherapy or radiotherapy," said Shoshani. "The new work highlights the role of chromothripsis at all critical stages in the life cycle of amplified DNA in cancer cells, explaining how cancer cells can become more aggressive or drug-resistant."

Said Cleveland: "Our identifications of repetitive DNA shattering as a driver of anti-cancer drug resistance and of DNA repair pathways necessary for reassembling the shattered chromosomal pieces has enabled rational design of combination drug therapies to prevent development of drug resistance in cancer patients, thereby improving their outcome."

The findings address one of the so-called nine Grand Challenges for cancer therapy development, a joint partnership between the National Cancer Institute in the United States and Cancer Research UK, the world's largest independent cancer research and awareness charity.